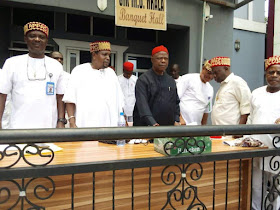 The Presidential Candidate of All Progressives Grand Alliance, APGA, Professor Peter Umeadi says the involvement of personal interests in governance is the bane of Nigerian nation.

ANAMBRA PEOPLE gathered that Prof Umeadi stated this during a Thank -You visit to the Association of Past Presidents-general in Anambra State, APPAS held in Awka.

The APGA Presidential Candidate who was accompanied to the visit by his team, said that APPAS is the first grassroot group to endorse his presidential ambition and he came to appreciate them for the gesture.

On tackling Nigeria’s challenges of corruption and insecurity, Prof Umeadi said the triple banners of rule of law, separation of power and due process must be employed for good governance to be realized.

The presidential candidate who described himself as the face of APGA in Nigeria, recalled how the political party started his political journey in Nigeria, adding that APGA is the identity through which the South East will actualize its desire for Nigeria presidency.

Earlier in his remarks, the national President of APPAS, Chief Omeife Omeife, welcomed the APGA Presidential Candidate warmly into their fold and recounted the efforts of the association in convincing him to vie for Nigeria’s presidency.

He promised that the South East group of APPAS will put into consideration the request of the APGA Presidential Candidate.

Also contributing, a past President general of Umunze, Brother Chris Amah, affirmed that it is the turn of the South East to produce the President of Nigeria, saying that Prof Umeadi of APGA has paid his dues in Anambra state as one time Chief judge of the state, calling for concerted efforts to achieve the vision of Ndigbo.