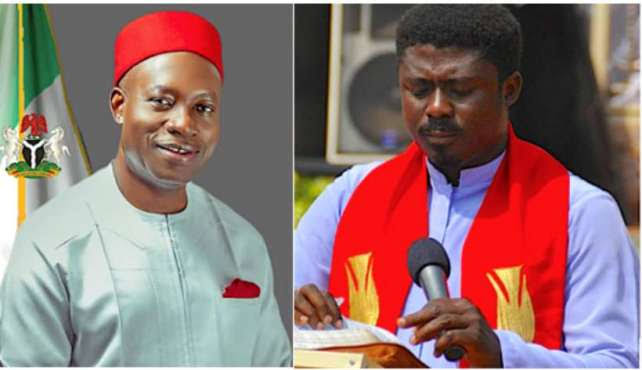 …It’s about money and failed prophecy for Andy Uba.

Most people are still in shock about Ebube Muonso’s often and unprovoked tirades against Gov Soludo. From all indications, Soludo doesn’t seem to be a good customer for the Priest’s business of anointing and prophecies for money. Ebube Muonso is still pained and can’t come to terms with the fact that Soludo is Governor and not one of his two anointed candidates.

First, he “anointed” and prophesied that Chukwuma Umeoji would be the APGA candidate for the election and did his utmost best to make it happen. His church was used as premises for stocking and sharing the vehicles that Umeoji shared to APGA faithfuls. He told people how Ada Umeoji had “invested” in his church and even making promises of monetary gratification on behalf of the Umeoji’s. When Umeoji finally lost at the Supreme Court, Ebube Muonso switched to Andy Uba.

He again prophesied and “anointed” him. He was so certain that God had spoken that he asked his elder brother in the Anambra State House of Assembly under APGA to crossover to APC.

His brother did and they were gloating all over the place. Who would not? After all, he spoke directly with God.

In the end Andy Uba and his entourage raked in about N50 million — and “anointing” and “prophecies” started multiplying.

About three weeks to the election, Ebube Muonso literally dedicated a mass to advertise and campaign for Andy Uba. When his two elder brothers and other supporters of Uba kept walking about during mass, he pleaded with them to please sit down advising them that “WHEN you get to where you are going, you can then behave as you wish”.

At the end of the mass, Ebube Muonso gathered over 1,000 women dressed in red blouse and red scarf into a hall exclusively for Andy to address them.

On the Election Day, Ebube Muonso was busy calling some security personnel to “help” Andy Uba. When one of them informed him that Soludo seemed to be winning, he assured the person that even if Soludo was declared winner, Andy Uba would take it from him in the court.

He kept assuring Uba that God had spoken and that “the seat” was his own. More money continued to flow and more prayers and prophesies.

Finally the Supreme Court concluded that Andy Uba was never a candidate in the first place. What would Ebube Muonso tell Andy Uba?

A very close aide of Uba complained bitterly that their loss was more painful in the light of the scam by Ebube Muonso.

I recall that on one or two occasions the former Governor and his wife took Soludo to go to worship there. Apparently, and from all indications it seem Soludo wasn’t a fan.

It doesn’t seem that Soludo is ready to play the usual money game and Ebube Muonso has vowed to continue to attack him as a strategy to get him to play ball.

Barely two months in office, he started asking him “where is the Dubai-Taiwan”. He even projected his personal wish of criminal attack on Soludo as a “revelation”. Is this what priesthood is degenerating to? Very sad indeed.

It does not matter to Ebube Muonso that Soludo has, given the peculiar challenges at the commencement of his regime, achieved in 9 months what many didn’t in their first term. Ebube Muonso cannot see;

the over 250 kilometers of roads being constructed all over the state.

He is pained that Anambra people are celebrating the first Christmas in decades without traffic which is the hallmark of daily life in the state.

Ebube Muonso cannot appreciate the historic employment of 5,000 quality teachers for the schools and about 300 consultants, doctors, nurses for hospitals or

The industrial master plan being put in place;

Successfully responding to the worst flooding in the state, de-silting some drainages and erosion control plus waste management, etc.

Ebube Muonso is the only one in Anambra who doesn’t appreciate that Soludo inherited a state in which 8 LGAs were in total occupation by the criminals and kidnapping and killing were daily occurrence.

He doesn’t remember that even the governorship candidate of the Labour Party was kidnapped in a moving convoy in 2021 and still missing or that even Soludo was attacked brazenly at a rally in his home town or that no candidate could campaign freely in the South zone and election nearly didn’t hold in Ihiala.

Beclouded by anger about his lost business, it is convenient for him to be pained by any good news from Anambra. He could not see that other four southeast states observed a five day sit at home but not one day in Anambra.

While well meaning Ndi Anambra celebrate the government and people, Ebube Muonso is angry.
For sure Ebube Muonso cannot be happy. Some of the beneficiaries of the old order especially the revenue merchants patronize him heavily. As they lose out and complain, so also Ebube Muonso.

Indeed one of the persons he recently called out for prayers at his new year mass was one of those raking millions from the state every month. Birds of the same feather must flock together.
We all pray that one day Fr Obimma will return to what he was taught in the seminary.

This abracadabra merchandizing of “anointing” and “prophecies” is certainly not Catholic. Politicians flock to his tent in the hope of profiting from the “crowd” and he, in turn, gets the bountiful offerings and donations.

The real victims are the vulnerable masses who are used in this lucrative business. Too bad!