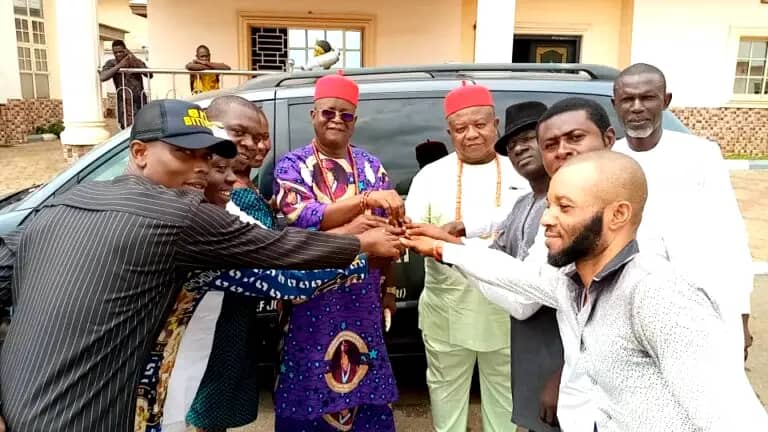 Efforts to consolidate existing peace between Aguleri and Umueri communities received massive boost on Sunday July 3, 2022 following the handover of a Sienna car to the Aguleri Umuleri Joint Peace Movement (JPM) for patrol of border villages, in order to ensure that no fresh conflict is recorded in the two neighboring town, ANAMBRA PEOPLE reports.

The car which was purchased and donated by the President General (PG) of Umueri General Assembly, Chief Johnny Chukwudi Metchie was handed over to the leaders of the JPM by the traditional rulers of the two communities, His Royal Majesty, Igwe Sir Benneth Emeka of Umueri and His Royal Highness, Igwe Dr. Mike Idigo of Aguleri. The handover ceremony took place at the palace of Igwe of Umueri.

Speaking at the event, Igwe Emeka who first prayed with blessed water on the car, praised Chief Metchie whom he described in Igbo language as an illustrious son of Umueri for his generosity, care and commitment to the good and welfare of his people.

Igwe Emeka recalled the unprecedented leadership milestones recorded by PG Metchie, barely three months of his assumption of office including connecting the community to a high-tech security network, ongoing solar powered street light project, attracting Dental Clinic and Dental Chair to the Umueri General Hospital, empowerment of women, youths and vulnerable people, among many others.

The Igwe said it was a rare gesture that PG Metchie who he said have been blessed by God, has decided to give back to the society through his numerous philanthropic gestures by using his personal resources to better the lives of the people, adding that it was a good example and worthy of emulation.

The respected traditional ruler prayed God to preserve the peace being enjoyed by the people of Aguleri and Umueri and make it everlasting, so that they would not witness conflicts again.

He therefore charged the leaders of the JPM to ensure that the car was used only for the purpose it was given to them, adding that he was sure the PG made the donation in appreciation of their commitment and dedication to duty.

In his own remark, the Igwe of Aguleri, Dr. Mike Idigo, thanked the Igwe of Umueri, not only for informing him of the donation of the car but also inviting him to witness its handover in his palace.

The Aguleri traditional ruler regretted all the incidences of conflict and war between the two towns, describing the people as blood brothers and sisters. He noted that the conflicts did not benefit anybody in anyway, rather the people suffered loss of many of their loved ones as well as huge properties.

He pleaded that efforts to consolidate the existing peace between the communities be sustained to ensure that no conflict arises again and commended Chief Metchie for the gesture.

In a message he sent to the Umueri Community WhatsApp group Sunday evening, PG Metchie who was out of the country when the handover was conducted earlier in the day, said he donated the vehicle to assist the JPM embark on patrol of the border villages that make up the two towns in order that incidences that would lead to conflicts are immediately tracked and resolved amicably.

Chief Metchie said it was his belief that when there is peace, the people of the two communities who he said are from the same ancestors would expedience rapid development.

Chief Metchie said he feels privileged to be part of efforts to transform Umueri and its environs to become the destination for investors and others seeking where to live peacefully, enjoy quality life and raise their children.

While promising to do more in the near future, the Umueri PG solicited similar gestures from other well to do members of the two communities, adding that more patrol vehicles, security gadgets and other materials are needed for the JPM to function effectively.