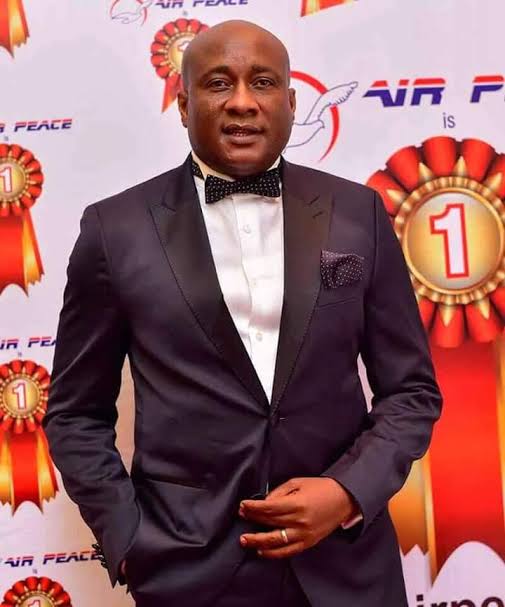 Biography
Allen Ifechukwu Onyema is the Chairman of  of Air Peace Airline, he is a Nigerian lawyer and entrepreneur.

Marriage
Allen Onyema tied the knot with his wife Alice Ojochiba Onyema, she is from Igala woman in Kogi state in 1993.

He was born in March 1964 in Benin City to Michael and Helen Onyema as the first of nine children. He hails from Anambra State, Nigeria.

Education
Allen studied law at the University of Ibadan and graduated in 1987.
He attended the Nigerian Law School and was called to Bar in 1989.
He attended several Schools including Government College, Ughelli, Delta state.

He left Government College in 1984 having obtained his Higher School Certificate and was directly offered admission to read law at the Nigeria’s Premier University, The University of Ibadan in the same year.

Allen Onyema was called to the Nigerian Bar in 1989 and started his legal practice in 1990 in Chief Vincent Amobi’s Law Firm – Nwizugbo & Company at Lagos although he had glaring opportunity to work in Shell Oil Company. He later ascended to become the Head of Chambers in Nwizugbo & Company two years later.

In 2013, Onyema founded Air Peace, as a private Nigerian airline. According to him, the business was borne out of the interest to create jobs for people. Although, the process began far back in 2007, but it encountered many hassles. Then, right about when Allen wanted to give up the airline dreams, solution came.

Today, Air Peace provide services to major cities of Nigeria and fly to other international destinations such as; Senegal, Sierra Leone, Liberia, Ghana, United Arab Emirates, India, China, USA and Gambia. It is one of the biggest airline in Nigeria with series of aircraft including 3 Boeings 777.

Firstly, he organised the 1st Nigeria Forever Project in 2005, with the support of the Federal Government. The project which was done to promote broad nationalism as against ethnic nationalism became successful.

In September 2019, Allen was instrumental in the evacuation of Nigerians from South Africa as a result of Xenophobic attack. This act has remained a laudable effort as he was able to converge hundreds of Nigerians willing to return to their dear country.

Allen Onyema established a real-estate business which he called Allen Onyema & Company and he also runs an import trade outfit called Continental Business Links Ltd. He is also the owner of Air peace, a private Nigerian airline that was founded in 2013 but took off on 24th October 2017 due to some hassles, its headquarters in Lagos State. Air Peace is known to provide transport service by air to the major cities in Nigeria as well as other countries such as Senegal, Sierra Leone, Liberia, Ghana, United Arab Emirates, USA, Gambia, and more.

Net Worth
Allen Ifechukwu Onyema is one of the most influential and richest men in Nigeria with multiple sources of income.
Allen Onyema’s net worth is an estimated $300m.

Chief Allen has received various prestigious awards both nationally and internationally. He won the hosting rights for International Conference on Nonviolence and Peace in 2007.