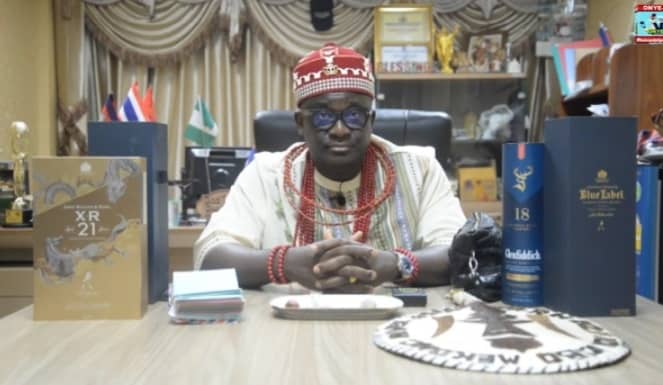 As a shining light for Ndi Igbo in the diaspora, a defender of what is best for our people in their land of sojourn, for being an ardent mobilizer of resources geared towards the pursuit of the genuine cause of Igbo man in diaspora particularly in the six nations around the Mekong River in Asia, HRH Eze Amb. Jerome Ezeneche is ANAMBRA PERSON OF THE WEEK.

Recently, Igbos all over the world converged in Thailand for the celebration of Iwa Ji Ndi Igbo (New Yam Festival) and Ofala festival of HRH Eze Amb. Jerome Ezeneche as the leader of Ndi Igbo in Thailand. The event was also used to raise fund for the construction of the Igbo language center in Bangkok, Thailand. It was not just a celebration of the above stated events but an occasion to celebrate one man who has emptied himself in leading his people. HRH Eze Amb. Jerome Ezeneche has led Ndi Igbo in the six countries around the Mekong River with great wisdom and empathy.

From the feedback of Anambrarians in the six nations which comprises; Laos, Thailand, Cambodia, Vietnam, China and Myanmar, they are full of praises for his numerous achievements and have confirmed in unison that he is one person who has used his resources and influence to affect the lives of many.

Apart from empowering people, Amb. Ezeneche is a leader with great foresight and vision; he has proven overtime that leadership is beyond rhetoric and mere nomenclature. Here is a man who has deployed his hard earned resources into good use, for the service of humanity, as against the usual fun-fare and display of wealth on social media associated with some of our ‘new monies’. His idea about giving centers on the philosophy of teaching people how to fish and not just giving them fish. He equally believes that the liberation of a people starts with cultural awareness and that is the primary reason he conceptualized an Igbo language center in faraway Thailand. Some watchers have described his move as ambitious, saying it portrays him as a man with a sense of community and one whose only interest is to entrench legacies that will far out live him as a defender of what is best for our people.

Ezeneche said, “the aim of the Igbo language Centre in Thailand is to save our language from extinction. Most of us here have not visited home for a long time and some of us are married here and even to Thais. There is therefore need to bring our culture closer to these people so they won’t forget their identities and roots”.

Similarly, he has built goodwill over the years across several countries in Asia and that has positioned him to become an unofficial ambassador of some sort for our people, a bridge builder who has resolved several business disputes that would have degenerated to ugly situations. He has also provided references and guarantees for our people who are into business partnership with some Asian companies, especially when such persons require credit facilities. There is no better way to empower people.

Only recently, he took over the responsibility of government by assisting in the release of over 500 Nigerian inmates in Thai prison, making the number of Nigerians in the country’s prison as at today, an insignificant number, judging by what it used to be. The Thai authorities have continued to release letters of commendation to him for his selflessness.

Amb. Ezeneche is worthy of celebration for taking leadership to another level, a departure from the usual arm chair style of just having a position without the corresponding responsibility.