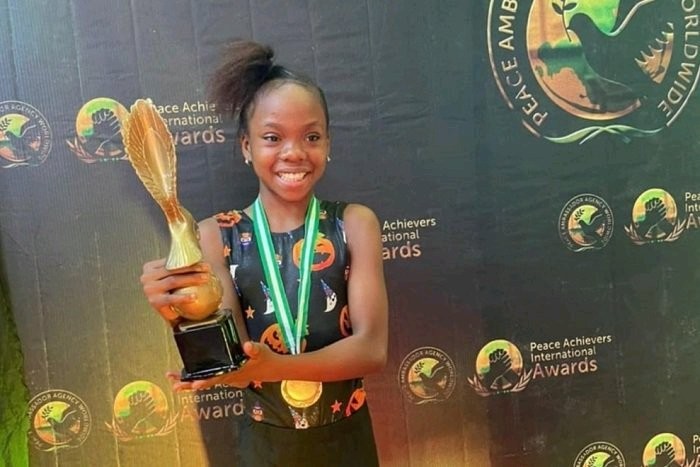 For her passion in gymnastics and for using that passion in bringing massive attention to what young people can do, gymnastics and equally bringing honour to Anambra State through the same passion, Stephnanie Onusiriuka is Anambra Person of the week

The average Nigerian child has little to worry about – chores at home, navigating secondary school, assignments to take, and relating with peers, but not Stephanie. At 11 years old, Stephanie Ogechukwu Onusiriuka deals with that while balancing a passion for gymnastics.

Her parents first noticed her aptitude when she was 2. Only months after she had learnt to walk, Stephanie balances, tumbles, and rolls. An interest that only deepened as she grew older. When she was 7, her parents decided to enrol her where she could receive professional training.

Despite Nigeria having a federation of gymnastics, not enough attention is paid to the sport. The natural talent in Nigeria is often left unnurtured till they fade. Nigerian parents have historically only encouraged STEM education (science, technology, engineering, and math) related subjects with little or no extracurricular activities. But Stephanie’s parents know a fundamental truth – that there is no one path to greatness. They have supported her fascination, helping her to achieve prodigy status.

Now, like the greats that have come before her, Stephanie puts in the work, training 6 hours a day, Tuesday to Sunday. Even in 2020, when a global lockdown and social distancing put a pause on gyms and training centres, she would do so at home, participating in the Simone Biles handstand challenge and perfecting other routines.

In only 4 years, Stephanie has won over a dozen medals, most of them gold. Competing locally, nationally, and internationally, she has been able to not only win but get recognised for that.
• Stephanie won her first international gold medal in South Africa when she was just 8 years old.
• She also won 1 gold, 2 silver, and 1 bronze at the just concluded National Sports Festival 2020 that took place in Edo Nigeria. The event happened in 2021 because of the lockdown.
• She is currently a National Champion in Gymnastics in Nigeria.
• She won 4 gold medals and 1 Silver at Body Language Gymnastics Club in Lagos.
• She has also won several gold medals at her Club, TIG Gymnastics, and the best all-round
• Stephanie was a bronze medallist at the National Youth Games in Ilorin.
• This past August, Stephanie won a gold medal at the African Gymnastic Club Members competition in Pretoria. This got her a congratulatory message from her governor and presidential aspirant, Peter Obi.
Stephanie has also received recognition and awards for her accomplishments.
• She received an award at the Nigeria at 60 Banquet for Outstanding Gymnastics Child Athlete.
• She also received an award at Peace Achievers International Award for sports personality of the year.
• She was an awardee at the Women Power Conference in 2021. The event honoured 100 most distinguished African women.

Despite all her accomplishments, Stephanie still faces an issue that many athletes in Nigeria face which is sponsorship and funding. It is expensive to raise a child but even more so when they require training and other costly trips.

Luckily, last month, Air Peace awarded her with N1 million and free flights to the airline’s destination for her training and competition for her gold medal win at the recently concluded African Club championship in South Africa.

Stephanie still forges ahead with the help and support of her parents. Right now, she is training for a competition coming up in the UK this October while her parents make arrangements for the trip.

In the next five years, she not only hopes to compete at the World Athletics Championship, The African Games, the Junior Olympics, and, the Commonwealth Games but to also win gold medals.