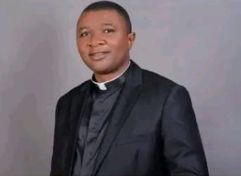 The cleric who is the Parish Priest in charge of St Joseph’s Parish Abata Nsugbe, Anambra East Local Government Area of the state was said to have been abducted on Wednesday, October 12, 2022 while returning to his house after celebrating a Funeral Vigil Mass at Umunnachi in Njikoka Council area if the state.

“It is with shock but strong faith in the love and protection of God that we announce to the Priests, religious, lay faithfuls of Onitsha Archdiocese and all men and women of goodwill, the abduction of our Priest Rev. Fr. Joseph Igweagu, the Parish Priest of St Joseph Parish Abata Nsugbe.

Rev. Fr. Joseph was kidnapped while returning to his house after celebrating a funeral Vigil Mass at Umunnachi on Wednesday evening 12th October 2022. We solicit for sincere prayer for his unconditional release from the hands of his abductors. The Archdiocese of Onitsha is doing everything possible to secure his freedom.

While praying for the conversion of his abductors, we call on our Mother Mary, the un-doer of knots, to intercede on his behalf so that he will be quickly released unhurt”

The Anambra state police command is yet to comment on this development.