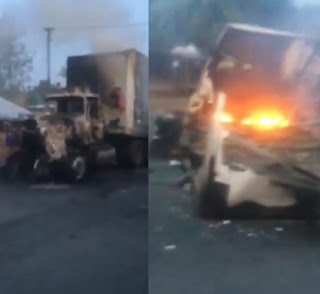 A car and three trucks conveying tomatoes were set ablaze by unknown gunmen at Ekwusigo-Ozubulu junction along the Onitsha-Owerri expressway in the early hours of Friday October 21, ANAMBRA PEOPLE reports.

The gunmen were said to have blocked the road to attack travellers plying the road. After stealing from them, the assailants then set ablaze the trucks and the personal car before taking to their heels.

‘It is a case of armed robbery and arson. It was reported in the early hours of today. The hoodlums blocked the Onitsha-Owerri road expresssway by Ekwusigo-Ozubulu. Police quickly went to the scene. Before we got there, the armed robbers had already made away with personal belongings of the victims who were on transit and when they couldn’t get what they wanted, they set the trucks carrying tomato on fire”

Tochukwu said three trucks and a personal car were burnt, however no casualty was recorded. He said the police has intensified patrol in that area and that efforts are being made to unmask the identities of those behind the criminal act.