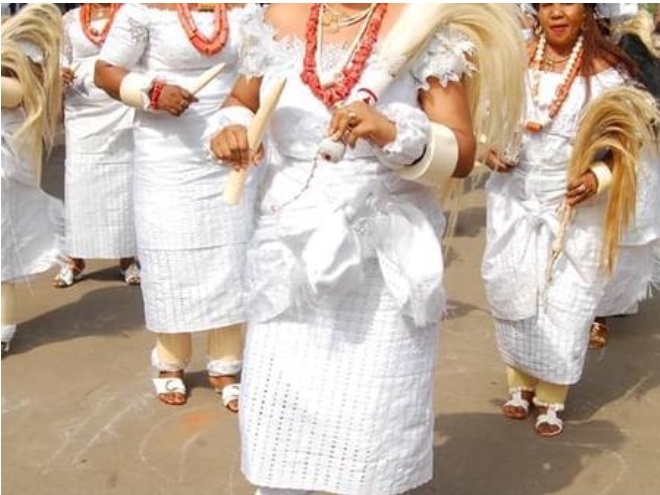 Traditionally Igbo women have always distinguished their social status through initiation into various societies in their communities.

Iyom society, otherwise known as Otu Ọdụ remains the most revered and coveted for women. Elephant tusk anklets known as Ọdụ are worn in both the legs and hands by members of the society as a distinguishing mark. This is in addition to an elaborate initiation ceremony involving great feasting, the type described in Chinua Achebe’s Things Fall Apart. Once initiated, an Iyom is expected to live a life of philanthropy upholding and defending truth always.

Members of Iyom society are recognized and honoured, and are given privileged sitting positions at ceremonies and events.

There are communities in Igboland that use brass anklets instead, the way some did in the olden days. However, the Ọdụ has survived till today while it appears that the brass ones have disappeared and are no longer preferred.

In parts of Nri in Anambra state, comprising Enugwu-Ukwu, Agukwu – Nri, Nawfia, Enugwu – Agidi and the rest, ‘Igba Ọdụ ’ is still well celebrated as it is used to initiate a woman of means, wealth and virtue into the Iyom society, or ‘Otu Ọdụ’, a women only society just like the Ọzọ society for men. In Igbo societies where Iyom society or ‘Otu Ọdụ’ is observed, it is the highest traditional society women can aspire to belong to due to the honour and prestige it bestows on members who are addressed by the title Iyom.

While many argue that the Igbo society is essentially chauvinistic and patriarchal, the existence of the ancient Iyom society shoots holes at such argument.

From observations and interactions with members of the Iyom society, it does not appear as if they are ‘challenging’ the men or are ‘asserting’ any rights or authority, the womenfolk and ndị Iyom just want to carry on with ‘their thing’. Why not? Ndigbo say ‘Egbe bere, Ugo bere’, ‘Ndụ mmiri, Ndụ Azụ’. Nke onye chịrị, ya zelu.