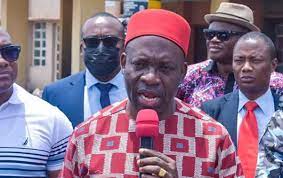 Suspected illegal miners and land excavators in Oba, Idemili South Local Government Area, Anambra State, Thursday, reportedly took to their heels on sighting a team of officials from the Ministry of Environment, who stormed the site to acquit itself with the extent of damages the mining and land excavation has done to the people of the community, ANAMBRA PEOPLE reports.

The team led by Mr. Johnbosco Emmanuel, had on arrival, inspected the site and condemned the activities of the suspects stating that they would soon be brought to book over the environmental hazards they are causing the residents.

Mr. Emmanuel said the team stormed the site based on the petition sent to the Ministry by the people of Aboji Akanano Union, Oba, through their lawyer, Barr. Cosmas Anusiobi, complaining about the environmental hazards , pointing out that government would not allow illegality to thrive in the state.

In the petition, signed by the President General of the community, Chief Dozie Nweke, the people stated that no responsible community would close its eyes and allow the activities of these illegal miners who they said caused irreparable damages to the ecosystem, the people of Oba and beyond.

“It is common knowledge that Anambra State and Federal Governments frowned against these unwholesome activities which are some of the remote causes of erosion devastations, as about 65 per cent of land in Anambra State are being threatened by erosion menace.

“Land and property owners close to the site now stand the risk of losing their investments as the area is now prone to land slide and gully erosion, which will result in great economic loss to innocent citizens,” they stated.

According to them, this indiscriminate excavation if not stopped would adversely affect some building structures that include, fences, houses, high tension poles and expose lands to erosion and may render people homeless.