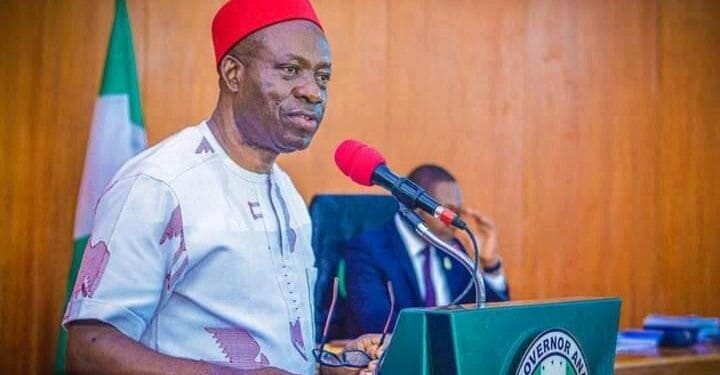 Governor Chukwuma Soludo of Anambra state has warned communities in the state against embarking on any form of violence capable of leading to bloodshed in the quest for selecting new town union leaders or traditional rulers, ANAMBRA PEOPLE reports.

Addressing demonstrators from the Umuchukwu community in Orumba South Local Government Area of the state who stormed Government House on a peaceful protest, Soludo maintained that the present administration along with its policies would not accept any act capable of disrupting it’s policy of ensuring a livable and prosperous homeland in the state.

Represented by his Chief of Staff, Ernest Ezeajughi, Soludo urged the demonstrators to adopt the idea of civic responsibility to move the state forward.

He however commended the peaceful demonstrators for towing the part of peace in their protest to the government and pledged to extend their complaint to the commissioners of appropriate government ministries for proper investigation.

The demonstrators, numbering over 1,500 stormed the Government House with a passionate appeal to Governor Chukwuma Soludo to issue a certificate of recognition to their Igwe-elect, Barrister Kenneth Maduka without further delay.

They also informed the government that they changed the name of their community from Nkerehi to Umuchukwu many years ago, based on a consensus arrangement, adding that some few disgruntled elements in the community are still answering the old Nkerehi name are merely taking them back to the dark ages.

During the exercise, the demonstrators displayed some placards in front of the Government House gate with inscriptions as: “Enough is enough”, “There is no town called Nkerehi”, “We need government intervention”, “We need the government to give our Igwe-elect, Barrister Kenneth Maduka his certificate of recognition” among others.

One of the elders in the community from Umuana village, Chief Emmanuel Otaokpukpu who explained their mission to Ezeajughi, lamented that the level of the conspiracy being exhibited by few families in the community who are still identifying themselves as people of Nkerehi, instead of people of Umuchukwu, having changed its name many years ago, with the consent of all its sons and daughters, has become too inexplicable that their antics are becoming unbearable in the area, hence their decision to embark on this peaceful protest.

Otaokpukpu further lamented that even as proper election was conducted with due process followed in line with state government approval before and after the adoption of Umuchukwu as the new name of the community, these disgruntled few families are still going ahead to destabilize the people and at the same time giving the government a wrong impression that all is not well in Umuchukwu.

Also in their separate speeches, the secretary to the former Igwe’s cabinet, Chief Godwin Onyeaso (Chukwunemeze of Umuchukwu); Chief Solomon Ukaegbu, former Chairman of the cabinet, Chief Felix Okafor: Chairlady of Indigenous Daughters of Umuchukwu (Umuada), Theresa Nnebe from Umueze village and Mrs Ndidi Eze from Umuana; former treasurer of the community, David Okoli and the President-General of Umuchukwu, Mr Emeka Adinchezo noted that the aim of the protest was to seek for government attention to harmonize the community and to disregard anybody who has plan to cause havoc among the peacemakers.

They however noted that regardless of the conspiracy, all benefits accruing from the state government to the community are being shared with equal rights.

They, therefore, urged the incumbent Governor Soludo’s government to look into their complaints in the area of chieftaincy stool in the area and give a certificate of recognition to their Igwe- elect, Dr. Godwin Maduka.
Some members of the indigenes present during the protest included Chief Anayo Ibe from Isiama village, Mrs Christina Ukaegbu from Isiama, Oluchi Mbama from Umuana, Oluchukwu Obiefuna, Kosarachi Otah among others.