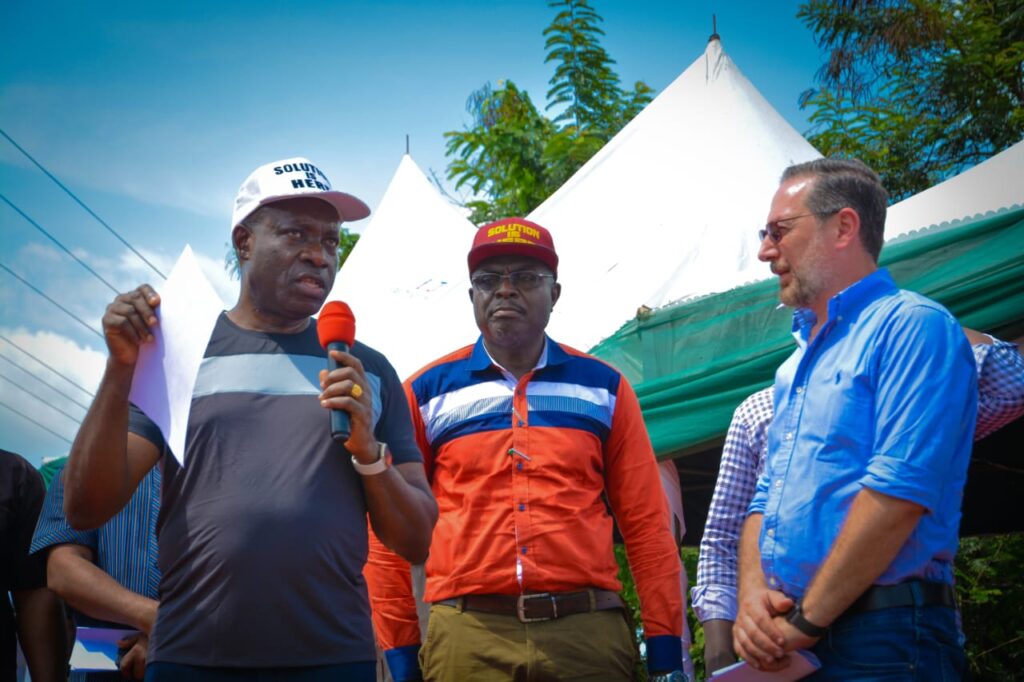 In fulfilment of his campaign promise to the people of Orumba, the Governor of Anambra State, Prof. Chukwuma Charles Soludo has flagged-off the Nawjija to Ogbunka road which will lead to Akpu, Ufuma, Ajali all the way down to Ogbunka, crossing three rivers.

Performing the ceremony, Governor Soludo recalled the idea to do the road was conveyed while attending a church mass at Nawfija, where the Parish Priest told him to remember them in his kingdom when he becomes Governor- to fix the Nawfija road.

The Governor said the request by the Parish Priest sunk into his memory because he knew deep down, that the road will be an easy access from Nawfija to Ogbunka.

He stressed that sadly, Anambra has a road crisis.

“Roads at Okpoko, Mmiata, Amansea through ebenebe, Awba-Ofemili shall be constructed and a bridge from Awba-Ofemili to Anyamelum shall be built.

“Also, roads from Ufuma to Awa, through Ndiukwuenu to Amansea will be fixed”.

Professor Soludo maintained that when the road is completed, from Ufuma, in 15 minutes someone can drive to Awka promising that before his one year in office, the road will be ready.

The Governor also promised to build roads from Nanka, Igboukwu to Ikenga, Obosi, Abagana, Nimo and Awka, in order of priority. According to him, Ndi Anambra are in major need of roads.

“I inspect every roads that shall be constructed before embarking on the construction”.

“I was at Nnewi to take a look at the state of the roads”.

The Governor went on to declare that Nnewi is the largest urban city in the Anambra South Senatorial zone and must therefore rise again, stressing that he is vigorously working with the solution team for Anambra to be better.

“We will fix roads in Ezira to Achina. This project is our own! The quality of roads we are building has never been done in the state, they are guaranteed to last for 20 years.

“But we have all our personal responsibility and it should never be taken for granted.

“For these roads to continue, Orumba North and South should understand this is an APGA project.”

Soludo urged the people to vote for APGA and its candidates (Senate, House of Rep and House of Assembly).

He said that their victory will aid his government to continue developing Orumba by attracting resources from Abuja to State level.

The TC Chairman of Orumba South, Prince Neville Uchendu appreciated the Governor for running his administration with transparency, dedication and accountability.

The Commissioner for Works, Engr Ifeanyi Okoma said the road was awarded in 2018 by the previous administration.

He said Mr Governor decided to fix the road when he came onboard.

Speaking further, he said a consultant was employed to do the road which is 16.4 km and the contractor hired has a good track record

He also revealed the road has 200 millimeter 8 inches stone based cement stabilization and the designed time line for the road is 20years guaranteed by the Contractor and Consultant.

The Contractor, Mr Daher Kaworma of Datum Construction Nigeria Limited gave the assurance that the road which is 16.4 KM will be completed 10 months from now.

In a separate speech, the APGA Candidate for Orumba South Anambra House of Assembly, Hon Emmanuel Nwafor said that Orumba South is one of the first beneficiaries of Soludo’s government, noting that from all indications, the Governor is committed to building the road.

The APGA Candidate for Anambra South Senatorial Zone, Hon Chris Azubogu, expressed confidence that Anambra will be greater under Governor Soludo’s watch and assured ndi Anambra that Mr Solution plus Mr Project equals development, just as The Deputy Majority Leader, Orumba North, Anambra House of Assembly, Hon Emeka Aforka said that being a son of Orumba, the Governor is aware that Orumba and Aguata are one.

Chief of Staff to the Governor, Mr Ernest Ezeajughi and the Commissioner for Agriculture, Dr. Foster Ihejiofor said that what the Governor is doing is the work of God, thanked him for the projects, and tasked the people on continued support for the present administration.