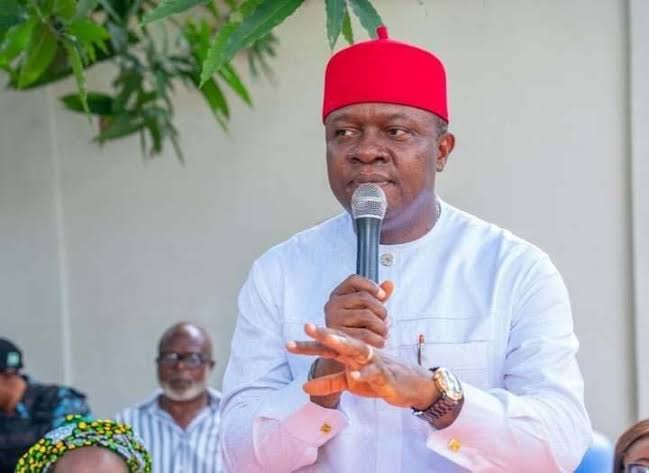 I refuse to dignify the rot of the process by participating in Anambra South Senatorial Primary. Evil comes in many colours. In PDP Anambra, its primary colour is Chris Uba. The secondary colours are in the National Working Committee of the Party that enabled him and his cohorts.

I am afraid that the entire process leading up to preparing the PDP Anambra Chapter for the primary is fundamentally flawed and I will not dignify this mockery of due process and blatant disregard for decency with my continued participation.

Yesterday, I formally wrote to the National Chairman of the People’s Democratic Party (PDP), Senator Iyorchia Ayu, of my withdrawal from contesting the primary for the ticket for the senatorial seat of Anambra South.

The actions of Chris Uba and the NWC-appointed minions have put the candidacy of many of our party faithful in legal jeopardy!

We have, for too long, lost sight of what’s important. We have, as a party in Anambra State, focused on the ego and the power play that creates characters like Chris Uba in our midst.

The problems we face cannot be solved by acquiescing to the discredited notion that regards every long-standing member of the PDP as a “leader” or “stakeholder”. It is time we define what leadership means to us in the PDP.

I believe that leaders should be determined not by age or years in the party but by their character that upholds the principles of justice, fairness, and transparency; by their contribution, which builds up our party; and by their political ideology of inclusiveness, development, and growth.

Our real problem lies in the blatant disregard for the rule of law. Instead of joining Chris Uba’s devious game of musical chairs, we ought instead to focus on how to clean house and restoring peace, order, and unity to the PDP.

It is imperative that the PDP, which Dr Ayu leads, makes this our focus if we wish to remain a party of the people in Anambra and take power at the centre in 2023; or else, we are in for a rude awakening.

Too many of our members have had their investments in the party destroyed by the actions of Chris Uba and cohort and their anger boils over. Soon there may be no meaningful PDP in Anambra state.

How is it that one aspirant, an interested party in the process for the Congress, takes over the process by supplying the names of his domestic staff and allies to be on the panel coming to Anambra to conduct the Ad Hoc Congress?

Specifically, Captain Umar Bature (Rtd), PDP National Organising Secretary (NOS), is complicit in this dangerous and divisive approach to conducting the internal elections of our party.

True to form, Chris Uba succeeded in hijacking the process. He was seated at the stage, right beside the panel as the kangaroo exercise was being conducted. The panel chairman and members, firmly under Uba’s control, openly taking directives from Uba.

The actions of Chris Uba and Linus Ukachukwu, with the support of Uche Ekwunife, Stella Oduah, and a few others are the reasons PDP in Anambra may end up fielding no candidates in the 2023 elections.

What a dark day in the history of the PDP, a party with such great promise and potential.

May this ugly episode in PDP Anambra be an opportunity to commit to reclaiming the soul of our party from those sworn to its destruction, and it begins with telling the true story of how we got here.