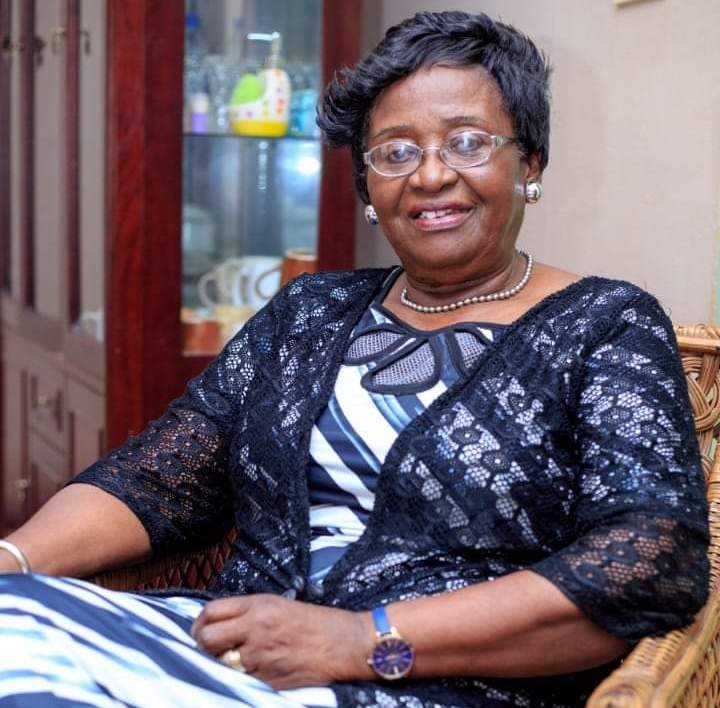 Prof Ifeoma Egbuonu is a professor of medicine and the daughter of renowned female politician, Chief Janet Mokelu. She spoke to Anambra People about the beautiful memories she had about the great woman. Excerpts;

LET US KNOW A LITTLE ABOUT YOUR MOTHER?

My mother was born Janet Nwadiogo Onwuegbuzia. She was from Umuagu in Asaba.  Her father was a teacher and a catechist at CMS mission. The nature of their father’s work required that the family move around a lot due to transfer. And so she followed her father to wherever he was teaching and it was when they were at Orlu that her mother died. She was 12 years old then and there were five of them and she was the oldest. She attended St. Monica’s, Ogbunike and when she passed her standard six, she did her higher elementary training there and then she started teaching. When I got to know her as my mother, she was staying at Oba alongside my father who was also a teacher. My parents got married in 1932 and they were usually transferred too. They moved to Imo state and then moved to Enugu to teach at St. Barth’s school and that was where many of my siblings were born. She was headmistress and my father was headmaster but later on, my father left teaching and went into business but my mother continued teaching. She had a class of girls and she taught them sciences and from there, she got into politics.

WHAT WAS SHE DOING BEFORE SHE JOINED POLITICS?

My mother was a certified teacher and she continued teaching until she reached the peak. My mother was involved in the colliery shootings demonstration during the colonial era. She helped mobilize women of Eastern Nigeria to demonstrate against colonial shooting to death of coal miners in Enugu in 1949, and that was one of the factors that sent the colonialists packing.

DID SHE TELL YOU WHY SHE JOINED POLITICS?

She joined politics because women were treated in a demeaning manner in the society.  They were treated as chattels, as properties that can be owned.  Back then, women did not receive the same pay as the men and they were not allowed to vote. She fought for women suffrage when she joined politics. She joined the NCNC and she was the secretary General of the women’s wing of NCNC. It was a very strong wing and she was their secretary and represented the women at different places.

DID SHE BELIEVE THAT WOMEN WILL GO INTO POLITICS?

DID SHE EVER TRY TO TALK ANY OF YOUR SIBLINGS INTO POLITICS?

She didn’t talk any of us into joining politics. She allowed us to do what we have disposition for, but you know, I have a brother who later joined politics and became a minister.

WHAT WAS HER PHILOSOPHY ABOUT POLITICS AND WAS SHE CONTROVERSIAL AS A FEMALE POLITICIAN?

She was not controversial because she worked for women, children and the less privileged. She widely travelled in and outside the country. She was in the all women delegation to Britain on the platform of National Council of Women’s Societies (N.C.W.S) to see Queen Elizabeth II for solution to the Nigeria-Biafran civil war. She also visited Switzerland to seek for peaceful settlement of Nigerian-Biafran civil war.  She took her religion seriously and she was a Knight of the Anglican Church. She was among the first three women to be knighted, my father was also a Knight but she was a Knight too in her own right not a Dame. That was why they addressed her as Sir.

WOULD YOU SAY THE HOME FRONT SUFFERED HER ABSENCE AS A FEMALE POLITICIAN?

I really can’t recall missing my mother when she was away from home because the house was always filled and we were provided for whenever she travelled. She equally made adequate arrangements for all our needs, though she didn’t stay long away from home. We had people who were living with us and you know that those days, children were raised by everybody.

HOW SUPPORTIVE WAS YOUR DAD TO HER POLITICAL AMBITION?

Without my father, nothing would have been possible because he trusted her and gave her absolute moral and financial support. He was very proud of her and he had no reason to subdue her at all. My father put in everything he had to promote and support her.

APART FROM PARTY POSITIONS DID SHE VIE FOR ANY POLITICAL POSITION AT ANY LEVEL OF GOVERNMENT?

She was elected into the Eastern House of Assembly representing Enugu North. She vied for the position and I remember her opponent was Byron Onyema and she won. It was that same election that Margret Ekpo also contested at Aba. NCNC fronted the two women and my mother’s result came out first so she was the first woman to be elected into Parliament. The election was at Enugu and you know back then, there were no telephones for fast communication. Before then, she was appointed into the Eastern House of chiefs with Margaret Ekpo in December, 1959 by governor of Eastern Nigeria, Sir Robert De Stapledon. My mother had some bills to her name and she would later become special adviser to Jim Nwobodo on commissioner level.

COULD YOU RECALL SOME OF HER ACHIEVEMENTS?

My mother was one of the leaders in the campaign for the creation of Midwest state later Bendel state, now called Delta and Edo state. She was the president, Anglican Women’s Association, Enugu which built Girl’s High School, Awkunanaw. She spearheaded the building of Boy’s Secondary School, Oraifite. Because of her so many achievements, she was honored by Her Excellence, Mrs Maryam Babangida in conjunction with the former national president of National Council of Women’s Societies of Nigeria. She also received the government of Anambra state merit award for distinguished and outstanding contributions towards the development of Anambra state. These are the ones I can remember.

WHAT WAS HER HOBBY?

She was an organist, a top soprano and artist. My mother liked to type, she had a typewriter and was the one that typed all her letters. She was also a seamstress, a hostess per excellence and she also enjoyed philanthropy.