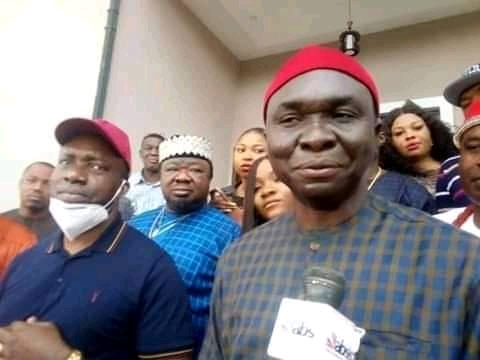 The Chairman of Rotech Energy Services Ltd, (Developers of Anambra Place Luxury Estate, Nkwelle Ezunaka & Eastern International Market, Onitsha) Chief Austin Oguejiofor (Onwa Enugwu Ukwu n’Umunri) has congratulated the 6th Civilian Governor of Anambra State, Prof Chukwuma Soludo for a successful inauguration as the new Governor.In a Press Release from his Estate Office at Nkwelle Ezunaka, Chief Oguejiofor eulogized the vision of the new Governor as detailed in his address to Ndi Anambra during his inauguration address. “I found very interesting synopsis and detailed programs as enunciated in Prof Soludo’s address which has the capacity to take Anambra State to higher heights if implemented to the later’; The release said.Further, Chief Austin Oguejiofor called on the good people of Anambra State to support the programs and solid visions of the new Governor, as they are capable of lifting the life and welfare of the citizenry and totally transform the State. In the same vein, Chief Oguejiofor further called on all the co-contestants of Prof Charles Soludo to come on board and help the new Governor in moving the State forward. The Rotech Energy Services Boss enjoined businessmen from Anambra State to always “Think Home” and bring their investments into Anambra State to help boost the economy of the State and improve our GDP. Oriental News