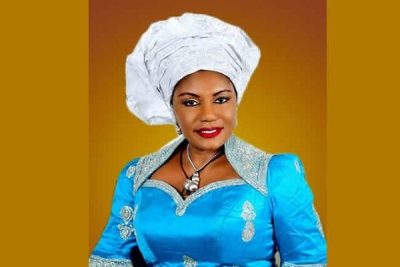 I had a dream; well, I am not sure if it was really a dream or hallucination. In it, angels were singing hossanah and, from what I could glean, it had to do with a recent event of unprecedented proportion. Now, it looks to me that the reason for the joyous mood is not unconnected to a great event that happened in our Federal Capital Territory recently, which we had had a hint of some weeks before it took place. So great was this event that the heavens rejoiced. And the earth glowed.

That day will never be forgotten in history. It was the day one of the most beautiful, brilliant and intellectual women in the world, Nigeria, Anambra State and Anambra North joined the race for the Senate. It was Wednesday, April 6, 2022, when Mrs. Ebelechukwu Obiano stormed the national headquarters of the All Progressives Grand Alliance (APGA) in Abuja to collect the Expression of Interest and Nomination Forms to displace Senator Stella Oduah, former Minister of Aviation under the Goodluck Jonathan administration. Some weeks before then, her husband, Willie Obiano, the immediate past governor of Anambra State, had told reporters that his wife was going to run for the Senate in 2023. For those who had thought Obiano like many of his colleagues would be the one to head for the Senate, he took the wind out of their sail. Now, we are not in doubt about where the ex-governor’s support lies and that he prefers to take the back seat for madam to shine.

Like she did when she walked up to ex-beauty queen Bianca Ojukwu to receive a cool slap during the inauguration of Prof. Charles Soludo as her husband’s successor, Mrs. Obiano was majestic when she stormed the party’s office to collect her forms. Her swagger gave the impression that the election was already called and Senator Oduah should start packing her personal effects out of her office in the upper chamber of the National Assembly.

From what I heard, the Senate will gain a lot from Mrs. Obiano, going by the many great things she did as the governor’s wife, and her reputation for being foul-mouthed and lacking decorum. So powerful was she that not a few saw her as the de facto deputy governor. There are some who even saw her as the governor and she cared less about what anybody thought. It was her special breed of self-love.

Her otherworldly achievements are said to include being hot-tempered, emerging as the most powerful First Lady Anambra State ever had, being in everybody’s face, talking carelessly, being shameless, and even combative.

For these reasons—which show her as a friend of the vulnerable—her people put her under pressure to give them quality representation, to swell the rank of women in the Senate and to show the men in the Senate pepper when they talk down on women and when they take decisions that can hurt the girl-child. I heard she was initially reluctant. She wanted to rest after eight years of meritorious service to the people of Anambra State. But her people will not relent. They cried, they gnashed their teeth, they stayed put on her doorstep and they were just generally inconsolable over her decision to rest and rest after the gargantuan service years to Anambra people. Though sad about the whole scenario, they resolved not to give up and they increased the tempo of the pressure on her. They called in Chineke, they deployed the gods of their land and they fasted days and nights and, eventually, their prayers were answered. With an infectious smile on her face, Mrs Obiano said yes to their proposal. There is no doubt that she has enough war chest to prosecute this battle against Senator Oduah. And with the endorsement of her husband, who facilitated Soludo’s emergence as governor, it seems the APGA senatorial ticket for Anambra North is already in the bag. With her enviable track record, the Senate is about to gain a Senator of unmatched acumen and the advocates of patriarchy in the Senate should start shaking because a Daniel is coming to judgment. A warrior for women’s rights, an Amazon of no mean standing is set to paint the chambers pink.

But, since her declaration, traducers have gone to town to say that people will remember her first for her fight with Bianca on the day Soludo was sworn in on March 17, which took the shine off the new governor’s inauguration speech and every other thing at the event. But, trust madam, she is busy talking about her passion for women and the girl-child and widows. Enemies can go to hell, she cares not. She has moved on from what happened between her and Mrs. Ojukwu—the daughter of a former governor, a lawyer, a former Most Beautiful Girl in Nigeria, a former Miss Intercontinental, holder of the high profile Iyom title, the widow of the revered Igbo leader, Dim Emeka Odimegwu Ojukwu and a former Nigeria’s Ambassador to Spain. For madam, that is in the past. She has a race to win and only that and nothing else matters at the moment. 2023 is the future. March 17 is history.
But several people have refused to move on and have described what transpired on March 17 between Mrs. Obiano and Mrs. Ojukwu as scandalous and they are putting the blame on the ex-governor’s wife. In video clips of the incident, Mrs. Obiano left her seat for Mrs. Ojukwu’s seat, and called her derogatory names, as well as physically touched her. Mrs. Ojukwu’s warning that she should stop yielded no remorse until the special slap that forced a truce.

In her response to the incident, Mrs. Obiano said she only went to Mrs. Ojukwu’s seat to greet her. Several people who have seen the clips say she is lying. But I am too small to say a great woman like Mrs. Obiano is lying and, again, I am afraid of being walked up to majestically and called derogatory names. And to Governor Soludo, she has written to apologise for taking the shine out of his inauguration.

We have also been reminded that Mrs. Obiano had also called Senator Uche Ekwunife derogatory names and those she will gladly categorize as haters are using this to puncture her declared passion for women and their rights.

To me, Mrs. Obiano is a fighter. If you like, call her a street fighter. I have not said that. I have only alluded to her fight with Mrs. Ojukwu and Senator Ekwunife. Perhaps it is this fighting spirit that she wants to use to defend women and girl-child when she gets to the Senate. She will use it to fight men who support domestic violence, child marriage and other evils against women, including Female Genital Mutilation/Cutting FGM/C). So, should women start thanking God in advance for this gift?

One commentator pointed out that women certainly need the support of one another and having more of them in the National Assembly is a welcome development because they are currently underrepresented. This commentator also observed that Mrs. Obiano’s quest is to remove a fellow woman and as such does not represent having more women in the Senate. But Madam Obiano’s supporters are likely going to say having very vocal women in positions of power gives them the advantage of fighting against domestic violence, child marriage, FGM/C and other crimes committed against women. Is Mrs. Obiano’s sort of vocalness what is required in the Senate? This is a rhetorical question!

My final take: If being foul-mouthed, lacking decorum, being hot-tempered, being in everybody’s face, talking carelessly, being shameless, fighting other women and calling them derogatory names, and even being combative are virtues that make a good senator, the race for the Anambra North senatorial seat is already won and lost. But I have a strong conviction that it takes more than these to offer quality representation to the amazing people of Anambra North.