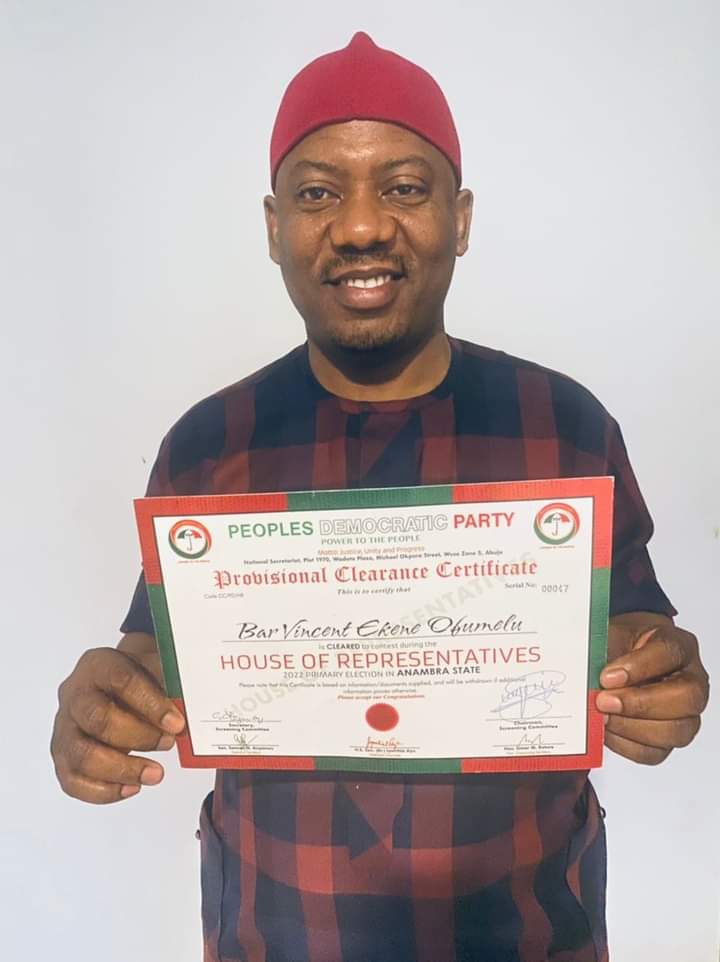 The National leadership of the Peoples Democratic Party PDP through its Screening panel has filed a petition against the member representing Oyi/Ayamelum federal constituency of Anambra State, Hon. Vincent Ekene Ofumelu over Perjury, an offence of lying on oath. 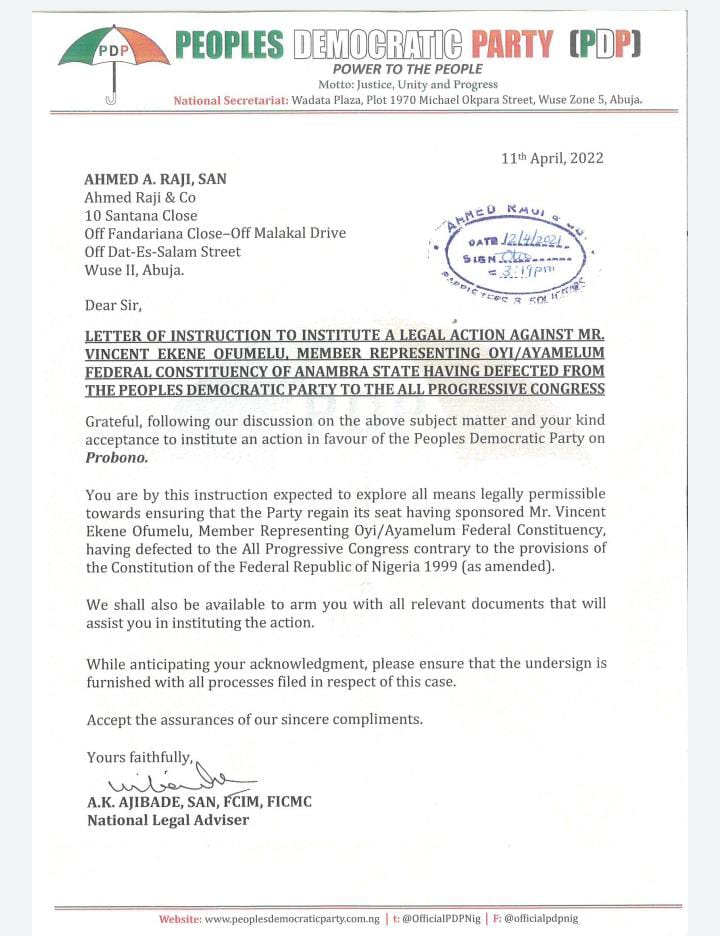 The PDP also withdrew provisional clearance certificate issued to Hon. Ofumelu following his clearance by the panel to contest for primaries to represent the people for a second term. 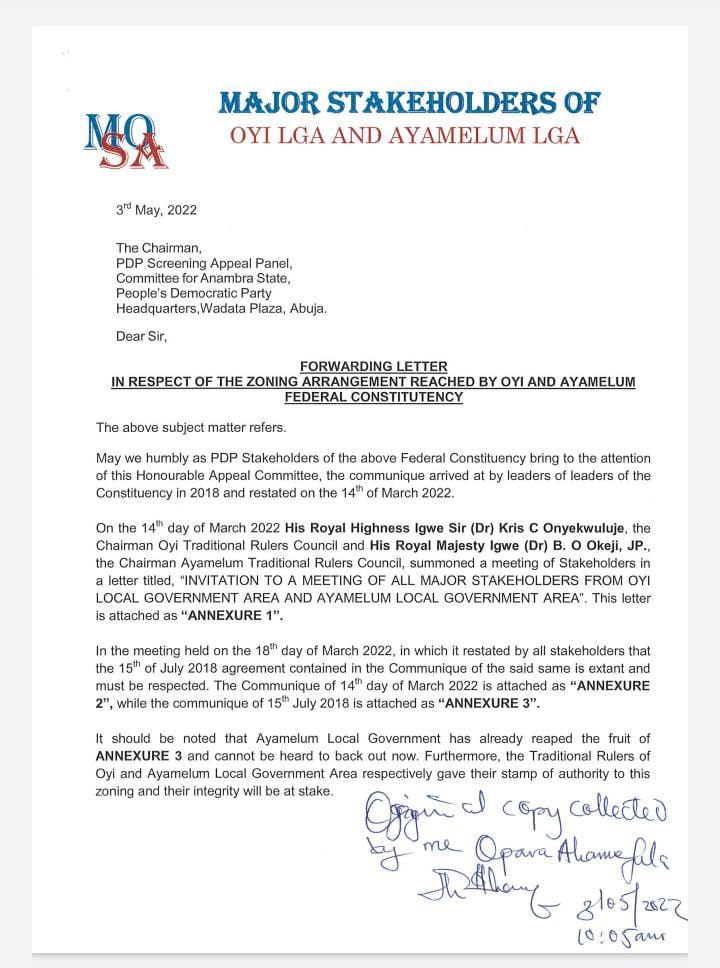 The House of Representatives member was said to have denied his membership of APC on oath, a party he was said to have belonged to during and after the November 6 governorship election in Anambra State even until the National Convention of the APC as evidenced in their party Convention list and Plethora of Pictures taken at the Venue. 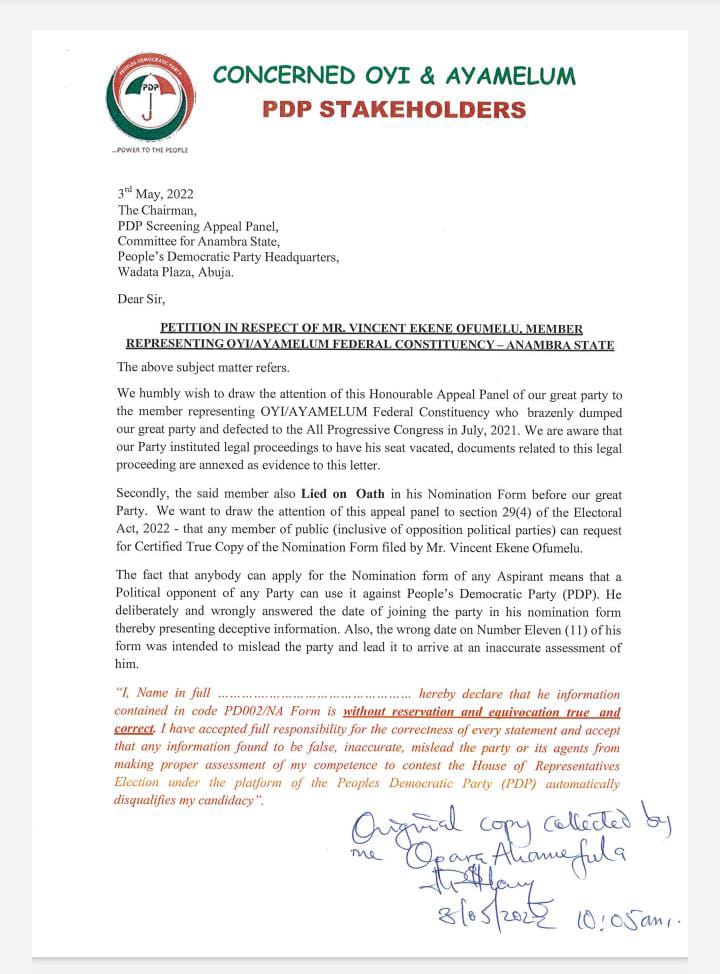 Unaware of the developments that Hon. OFUMELU surreptitiously concealed his involvements by defecting to APC, the PDP House of Representatives Screening Committee issued him a Provisional Certificate of clearance. 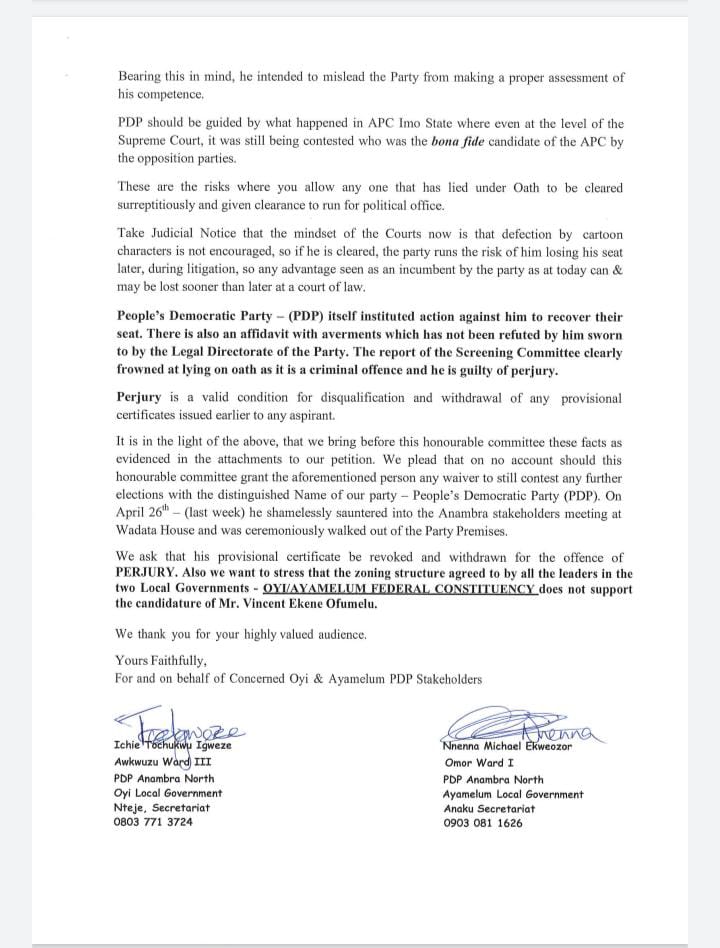 However, following a petition sent to the screening appeal committee by a group, Ayamelum Local Government PDP stakeholders, the party ordered the withdrawal of the Provisional clearance certificate while commencing a legal action against him. 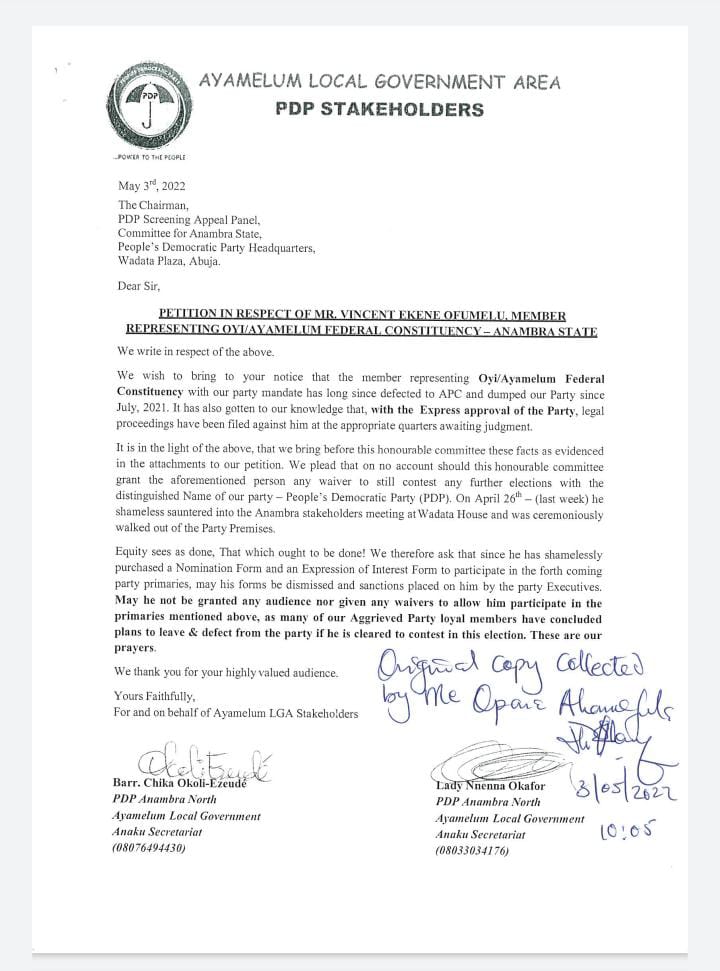 The petition partly reads, “We wish to bring to your notice that the member representing Oyi/Ayamelum Federal Constituency with our party mandate has long since defected to APC and dumped our Party since July, 2021.

“It has also gotten to our knowledge that, with the Express approval of the Party, legal proceedings have been filed against him (Hon. Ofumelu) at the appropriate quarters awaiting judgment. 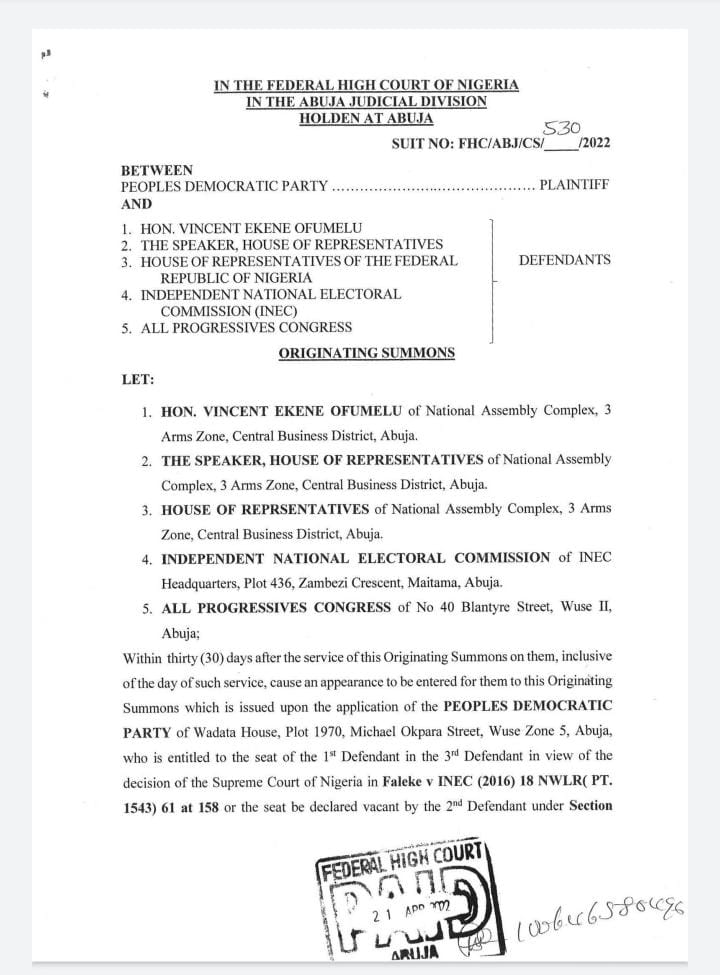 “On April 26th – (last week)he shamelessly sauntered into the Anambra stakeholders meeting at Wadata House and was ceremoniously walked out of the Party Premises by the Zonal Vice Chairman – Chief Ali Odefa.

Equity sees as done, That which ought to be done! We therefore ask that since he has shamelessly purchased a Nomination Form and an Expression of Interest Form to participate in the forth coming party primaries, may his forms be dismissed and sanctions placed on him by the party Executives.

“May he not be granted any audience nor given any waivers to allow him participate in the primaries mentioned above, as many of our Aggrieved Party loyal members have concluded plans to leave & defect from the party if he is cleared to contest in this election. These are our prayers.”

Additionally, the PDP stakeholders insist that existing Zoning arrangement does not support the candidature of Hon. Ofumelu.

Earlier, the PDP through its National Legal Adviser, A.K Ajibade SAN instructed Ahmed A. Raji SAN to on behalf of the party, institute a legal action against Hon. Ofumelu.

The letter of instruction partly reads, “You are by this instruction expected to explore All means legally permissible towards ensuring that the Party regain its seat having sponsored Mr. Vincent Ekene Ofumelu, Member Representing Oyi/Ayamelum Federal Constituency, having defected to the All Progressive Congress contrary to the provisions of the Constitution of the Federal Republic of Nigeria 1999 (as amended).

“We shall also be available to arm you with all relevant documents that will assist you in instituting the action. While anticipating your acknowledgment, please ensure that the undersign is furnished with all processes filed in respect of this case.”

The averments in their filed Affidavits has neither been denied nor Countered by Hon. OFUMELU till date, so they are All termed in Law – as admitted by him to be true.