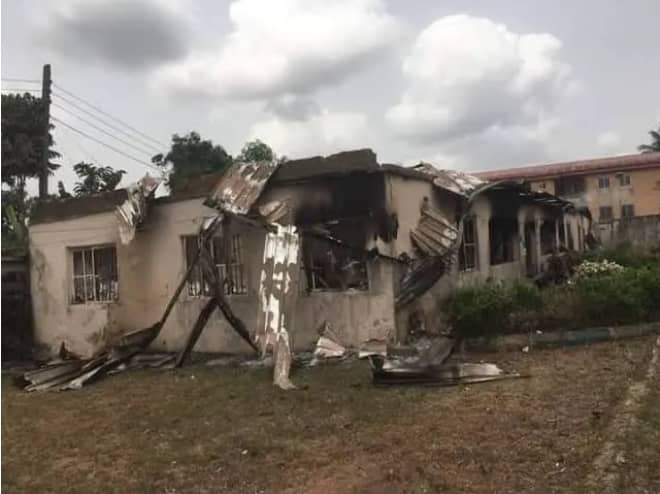 Hoodlums suspected to be unknown gunmen have allegedly revisited the headquarters of Nnewi South Council Area of Anambra State and burnt some more buildings and offices therein, ANAMBRA PEOPLE reports.

Recall that gunmen had earlier, in March this year, visited the Local Government headquarters, situated at Ukpor, where they set many buildings and offices ablaze and also killed a security guard who was on night duty there, before they eventually zoomed off.

Reports from sources in the area revealed that the gunmen invaded the Local Government Secretariat again at about 2.00pm on Tuesday and set ablaze some of the remaining buildings in the premises.

It was also alleged that they shot unconfirmed number of soldiers in the area while attempting to restrict them from enforcing the sit-at-home order.

The gunmen, from there, visited Ebenator community, also in Nnewi South Local Government Area, where they set ablaze the operational vehicle of the community’s vigilante, having earlier disarmed all the security personnel in the community.

It would be recalled that gunmen have recently intensified their attacks in Nnewi South communities.

It was gathered that few weeks after killing five persons in Osumenyi, one of communities in the council area, they also stormed again, and kidnapped the traditional ruler of Akwaihedi community, H.R.M. Igwe Colonel Wisdom Onebunne, shortly after which he was released. They also reportedly burnt down the house of the vigilante leader in the community.

After that, they visited Ebenator community again, where they snatched the official vehicle of the traditional ruler of the community, H.R.H. Igwe Edwin Chinaewubeze, from him.

As if that was not enough, they allegedly stormed the community’s vigilante office located at Orienwankwo Market, and set ablaze all the vehicles in the office.

With all these attacks happening just in a couple of weeks, the yesterday attacks and alleged detonation of some explosive devices in the area reportedly instilled fear in the people and caused commotion in almost all the communities in the area, as some of the residents were seen jumping into the village rivers, while some rushed into bushes, and others climbed tall trees, all in search of safety.

The spokesperson of the state’s Police Command, DSP Tochukwu Ikenga, could not be reached to confirm the attacks, as his phone number was not connecting as at the time of this publication.