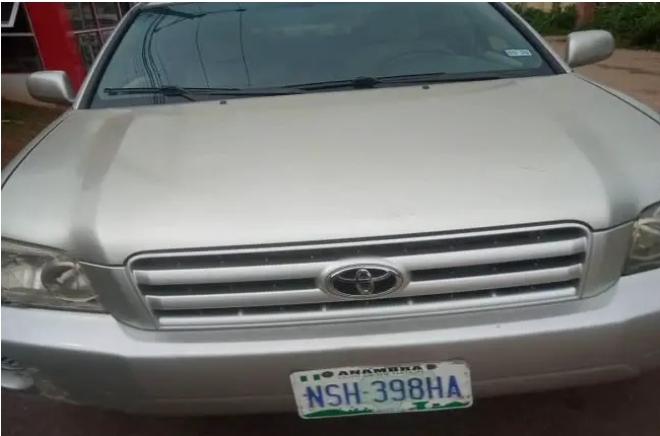 Irate mob have set ablaze one of a four-man kidnap gang terrorising Obosi Community in Idemili North LGA of Anambra State and its environs, while three other gang members escaped, ANAMBRA PEOPLE reports.

The incident, according to a source, occurred, on Thursday night, when a combined team of Obosi youths and security operatives accosted the gangsters and demanded to search their vehicle.

According to the source, on trying to search the vehicle, a husband and wife who was just kidnapped by the gang were found inside their vehicle and rescued instantly as the kidnappers opened fire on the team.

It was gathered that while the team was still interrogating the kidnapper, an irate mob allegedly trooped out from nowhere, snatched the suspect from the grip of the team, stripped him naked, and beat him to a pulp before setting him ablaze.

The burnt naked corpse of the suspect was seen still lying face up at the scene of the incident on Friday morning.

President-General of Obosi Development Union, ODU, Chief Ikechukwu Okolo and Ugonabo Shedrack Okenwa, palace secretary to Igwe Chidubem Iweka of Obosi who confirmed the incident said the town union, in collaboration with the Royal cabinet, specifically set up the combined team to counter the menacing activities of these hoodlums who have been terrorising law-abiding citizens of the area.

They disclosed that the team was just returning from where they had gone to search for suspected cultists’ hideout before they accosted the gangsters.

Meanwhile, the State Police Spokesman, DSP Tochukwu Ikenga, who confirmed the incident in a statement made in Awka, on Friday, said the State Police Commissioner, Echeng Echeng, has initiated an operation aimed at arresting the fleeing gang members and suspects who took laws into their hands by setting ablaze the arrested suspect.

The PPRO disclosed that the police operatives in collaboration with security operatives at about 9 pm on 23/6/2022 rescued the two kidnap victims and recover a Toyota Highlander jeep with reg nos NSH 398 HA and Toyota Camry with reg nos BRS 941 AA.

He said preliminary information, revealed that security operatives intercepted a seven-man kidnap gang along Awada. In an attempt to arrest the criminals, six out of the seven gang members escaped and abandon both the victims’ vehicle and their operational vehicle. The seventh person, arrested was lynched by an angry mob and set ablaze before police operatives could arrive at the scene.

Consequently, the commissioner of police, CP Echeng condemns the act of mob action by some members of the public who resort to jungle justice whenever they arrest suspects in respect of criminal allegations without recourse to the Police for proper investigation.

He also urged them to always exercise restraint by not taking the law into their hands. They should endeavour to take such suspects to the nearest police station whenever they are apprehended. This would afford the police the opportunity to conduct an appropriate investigation into the nefarious activities of the suspects, and bring them to justice in accordance with extant laws.