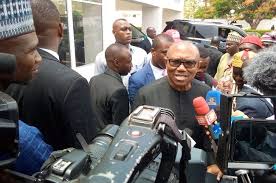 Presidential Candidate of Labour Party, Peter Obi, has taken his campaign to the Northern part of the country, ANAMBRA PEOPLE reports.

Obi, who has a large support base on social media visited the Chairman of Northern Elders Forum, Prof Ango Abdullahi.

Speaking to newsmen shortly after the visits, Obi said, “I came to get blessings and fatherly advise as well as discuss some political issues with the elder statesman.

“This is in view of his position especially in the north and his persistent agitation for good democratic leadership in the country.”

Obi said part of the discussion was to see how the country can turn into a viable and productive nation, as it has been unproductive for too long.

“Because right now the country is not productive, Nigerians are in hunger, they are jobless and are looking for a new life. Despite the vast and abundant farmlands in the north, Nigerians are still hungry as we continue to depend on oil, thereby abandoning one of the most important natural resources.

“We must come together and make Nigeria a new nation, a productive nation that can work well for all of us,” he said.

According to him, North is regarded as a strong political hold with a vast population that can influence the political direction of the country, hence the need to make proper consultations with relevant stakeholders towards building a greater and productive nation.

He advised Nigerians to think wisely before choosing their leaders.