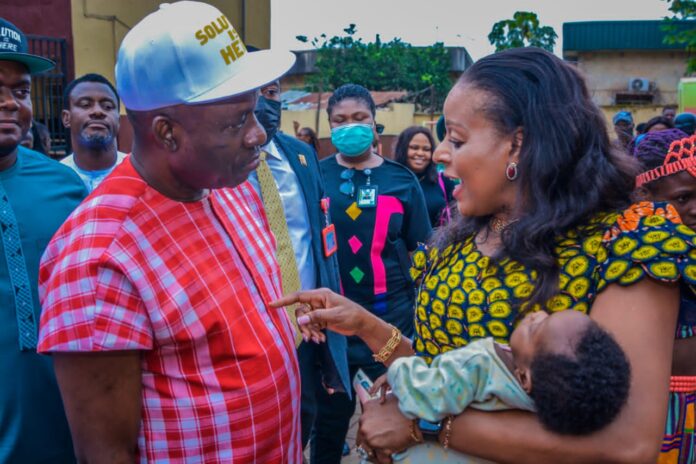 It was a joyful moment for some orphans and sick persons in Anambra State on Sunday as the wife of the state’s Governor, Mrs. Nonye Soludo marked her birthday in a special way with them, ANAMBRA PEOPLE reports.

Mrs. Soludo, who visited a hospital and an orphanage in Awka to celebrate the birthday, was accompanied by her husband, Governor Chukwuma Soludo; the Deputy Speaker of the State House of Assembly, Hon. Paschal Agbodike; and the Commissioner for Women and Social Welfare, Mrs. Ify Obinabo among others.

The well wishers accompanied the Governor’s to the Chukwuemeka Odumegwu Ojukwu University Teaching Hospital, Amaku-Awka, and later to Model Community Children’s Home, Ifite-Awka, where she donated foodstuffs and otherrelief materials to them. The visit was preceded by a thanksgiving mass earlier celebrated at the Governor’s Lodge, Amawbia.

Speaking during the visit, the celebrant, Mrs. Soludo said the donation was to show love to the beneficiaries; and further underscored the need for regular donation to the needy.

“This year has been a very eventful one for myself and the family. Our visit is in celebration of my birthday and to show my profound love to you as a family. We are well aware that donations to orphanage homes and many other institutions that rely largely on support from the public may have dwindled drastically because of the economic crunch, hence, the need to continuously show this love we are witnessing today,” she said.

On his own part, Gov. Soludo renewed his government’s commitment in strengthening the laws against child abuse and maltreatment, adding that the funds meant for servicing the orphanage will be sustained.

Reacting when shown a boy maltreated and battered with sharp instruments, the Governor frowned at such act, which he also described as inhumane, while also noting that the right of every child must be respectfully protected.

He said: “It is inhuman for a human being to treat a child this way. Every child deserves to be treated fairly with love and affection. We will make sure that the law will continue to run its full course.

“Government will continue to champion demonstration of compassion and thoughtfulness to make a positive difference in the well-being of our children.”

Highpoints of the event include special prayer for Mrs. Soludo, her husband, and the state at large.