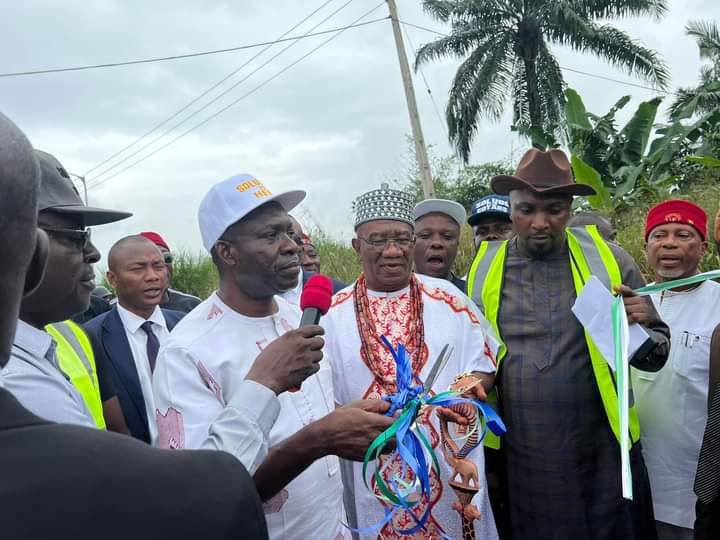 Ogidi is in Idemili South Council Area and commuters passing through that axis which is a federal road usually experience hardship, due to the perennial flood witnessed during rainy season in that location.

Speaking shortly before flagging-off the project, Governor Chukwuma Charles Soludo noted that most federal roads in Anambra State are in deplorable conditions, recalling his administration’s intervention on the federal road at Isuigbo, boundary between Enugu and Anambra which has now been fixed and the road opposite Chisco park which was also fixed by his administration

“We’ve intervened severally and it is costing us close to a billion naira. We have called on the federal government to come to our aid through the Federal Road Maintenance Agency, FERMA, but we are not going to just wait. Those on the longer term issues, we may wait for the federal government. But this one is emergency intervention because of hardship encountered by motorists”, Governor Soludo said

He directed the contractor handling the project not to allow it exceed three months.

Commenting on the security situation in the state which is gradually abating, Governor Soludo said, “I am calling on the good people of Ogidi not to habour any criminal in their communities. If you see something, say something. We are determined to wipe out all forms of criminalities not only in Ogidi but in the entire Anambra State. We must work together to rescue our dear State.”

“We will flag off many roads all around Anambra state. Anambra will be better for it because we have all agreed that the Solution is here”, The Governor further said.

Engr. Ifeanyi Okoma, Commissioner for Works and infrastructure development, emphasized that Governor Soludo was fully commitment in providing good roads in the State. The Commissioner emphasised that the Ogidi road construction is the first project being embarked on by the Governor after his Inauguration.

“The perennial flood experienced in this axis is not perculiar to Ogidi. Vehicles that pass through this place experience hardships. As a federal government road, the Governor could just have looked the other way and ignored it and keep waiting for the federal government, but he didn’t do that because the comfort of Ndi Anambra remains a priority to him”, said the Commissioner.

The member representing Idemili North at the State House of Assembly, Mr. Ifeanyichukwu Chiekwu and the Traditional Ruler of Ogidi, Igwe Alex Onyido appreciated the Governor for coming to their rescue. According to them, the flood has adversely affected the Community and environs, adding that the people of Ogidi remain grateful to the Solution Governor for his headlong approach in soloing the perennial issue.