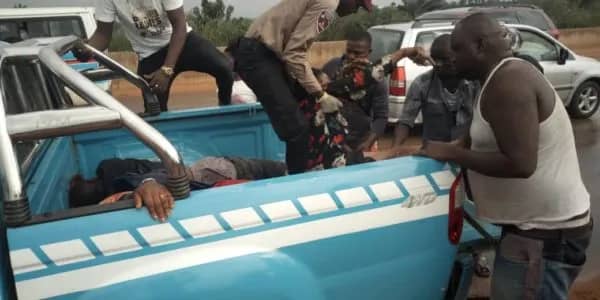 The Federal Road Safety Corps (FRSC) has said that two people died in a road accident on Sunday when a commercial Toyota Hiace bus rammed into a stationary truck beside the Police CID Annex on Onitsha-Awka Expressway, ANAMBRA PEOPLE reports.

“Probable cause of the crash was road obstruction and excessive speed.

“According to an eyewitness report, the truck developed fault and was abandoned by the truck driver after placing caution signs at the front and rear of the vehicle.

“The bus driver who was on speed rammed into the truck from the rear and crashed,“ the FRSC statement said.

It said that while 12 people, comprising eight men and four women were involved in the crash, two were killed and five others sustained various degrees of injury.

The Anambra FRSC spokesperson, Onabe said in a statement that the first responders from FRSC Nteje Unit evacuated the injured to a hospital and deposited the dead in New Word Mortuary in the town.

The statement said that the Anambra Sector Commander of the FRSC, Commander Adeoye Irelewuyi, has commiserated with the families of the dead and wished the injured ones quick recovery.

It said that the command had warned motorists to desist from speeding and to keep to the recommend speed limits.