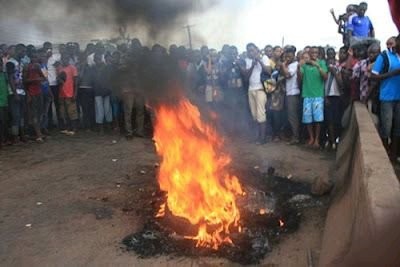 A suspected armed robber who gave his name as Omaliko has been set ablaze by an angry mob in Abatete community, Idemili North Local Government Area of Anambra State, ANAMBRA PEOPLE reports.

The victim, while responding to interrogations in a video trending on social media, claimed that he was a victim of ‘one chance’ robbery and had only escaped into an erosion site before he was accosted.

But reminded that he first pulled a gun on those who accosted him to find out who he was and his mission, he soft-pedalled. He, however, did not respond to his labelling as a thief by his interrogators.

The suspect was later set ablaze. One of the voices in the video was heard warning others at the scene that similar thing could happen to them should they be caught stealing.

The victim was accused of attempting to rob a woman whom he had boarded a commercial tricycle popularly known as Keke NAPEP with.
Police Public Relations Officer in the state, DSP Tochukwu Ikenga, said he was not aware of the incident.

He, however, said that the Commissioner of Police, Echeng Echeng, had warned residents of the state against taking laws into their own hands.