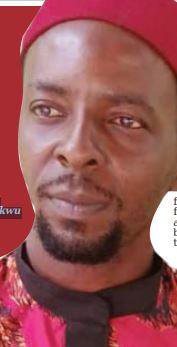 He claims that, he and some other youths and prominent indigenes of the community have been targets of ceaseless attacks, indiscriminate arrests and assassination attempts on trumped up charges allegedly by leaders of their community over land tussle.

He pointed accusing fingers at some security agents, a land developer, and the civilian security outfit, Ebubeagu in the area. He gave a vivid narration of his escape from death last month.

“At 5am, on Tuesday last month, I woke up from a bad dream and I began to hear sounds from the gate.  I looked through the window and saw people jumping through the fence. They were all dressed in dark clothes and wore masks.

They were more than forty, fully armed with pump action rifles. They broke the iron doors. Four of them that entered through the gate were carrying AK47 which showed that they were government officials. Their four hilux buses and a shuttle bus were seen in front of my gate. Those who carried pump action are operatives of Ebubeagu.

They surrounded the whole compound. They met one of my boys washing clothes early that morning outside. They were asking him, ‘where is the owner of this house. Where is the shrine located’? He told them he didn’t understand what they were saying and they started beating him. They asked him to take them to all the rooms where people stayed. He took them, first to the building at the back. He didn’t want to take them to my apartment first.

Forceful entry into my bedroom

“I then woke up my wife, I asked her not to make noise that I was inside the room, and that if anyone asked after me, she should tell them that I went to work and I didn’t return. I was inside my bedroom, they were hitting the door, and entered my apartment last. They destroyed the doors of all the tenants, dragged them out of their room and kept asking them ‘who is Ugochukwu.’

They went upstairs and broke the iron door leading to my younger brother’s room who is a pastor. They dragged him out of his apartment to where they gathered all the tenants outside, downstairs. There was a young man I helped secure his release at Zone 13 police station in Ukpo. I met him inside the cell during one of the days I was dragged there on trumped up charges. So, he came to my house for the very first time to say thank you. He came late, so I asked him to sleep over till the next day.

He was in my visitor’s room. They dragged him out and asked him who he was. He said he is a friend to me. They beat the daylight out of the young man. They kept torturing him to reveal where I was. They were shouting that there was an allegation that we killed people there, that we dealt in hard drugs, engaged in gun running, and that we were terrorizing the Igwe and his people.

They asked him to speak up that I was a killer. They asked him if he ate human flesh with me. The young man said he was not aware of those things and that it was his first time coming to Eziowelle. Then, they entered my apartment, I hung on the wall, they searched everywhere, and turned the entire house upside down looking for me. They left my room but came back later and continued the search the second time. They were in my house till 7 am.

They took my car key which was on the television stand and my handsets, entered my private room, and took two of my power banks, and my necklace. They also took six phones belonging to youths whose parents reported for being stubborn. They also collected the phone of my visitor. They took every cash they found in the house. The same thing was what they did in my younger brother’s apartment; they took about N30, 000 kept at his bedside. But when they realized who he was, they apologized and returned his money on the excuse that they took the money because they didn’t want someone else to take the money.

When they threatened to waste my wife and children, my brother raised his head from where he was lying down and said no, that they were innocent. They used the butt of the gun to hit his head, threatening to kill him if he uttered another word.

After they finished and left with my visitor, I came out from hiding, went to where my car was parked and discovered they took it with them. The balance of the N1.5 million I withdrew the previous day was inside my car that they took and my ATM card.

Abduction, release of my visitor

“Two days later, my visitor who was abducted and taken away came back and narrated what happened to him. He said they took him to their cell and continued to torture him. If you see the young man, he has injuries sustained from the beatings.

He said they blindfolded him until they threw him inside a cell before removing the blind. So, he saw so many helpless innocent people inside the cell. He said they continued to torture him, they tied his hands backward, and he was in that position for four hours till his hands were numb from lack of circulation of blood.

They were insisting that he must tell them where I was. He said he saw another prominent indigene of the town abducted same day, inside the cell. When they wanted to take them out of that place, they blindfolded their eyes again till they found themselves in Awka. That was the next day after the incident.

They took them from Ogidi to the DSS office in Awka where they met with their boss. When their boss saw them, he was angry with his boys because of how they tortured them. He asked them why they tortured them like that when it was not a criminal case, but an allegation from the village which was still under investigation.

Immediately, he ordered them to take off the handcuffs. They were released the next day when their main boss came back.

He said their abductors began to beg the other man who was also abducted from the community the same day popularly called Ijele, not to pursue the case further and that they would pay damages for his dog they killed, his son that they shot, and his wife that they stripped naked.

Genesis of our problem

“Four years ago, people in the community came together and said they wanted an election to be conducted for the position of the chairmanship of youths.

Our Igwe, Michael Okonkwo Etusi appointed one Emeka as the youth chairman without conducting an election. Unfortunately, the majority of people in our community rejected his appointee because they had no access to him. We rose in unison and denounced the oppression our youths were going through in the hands of the man appointed by our Igwe.  We decided to hold a new election and I was elected the youth chairman. We then took the list of the names of the executives to Awka which was acknowledged.

“After that, we embarked on consolidation and extensive developmental projects which were warmly welcomed by the teeming masses in our community. We also resolved not to confront the other people appointed by the Igwe but to work harmoniously towards the development of our community. We built four well-furnished houses for widows who didn’t have children, paid school fees for indigent children from nursery to secondary levels and over a hundred of them were given scholarships.

After that, we decided to take care of those who are sick and required urgent medical care. We began to take them to hospitals for both operations and everything. Those widows whose lands were snatched by the high and mighty, we went in there and began to retrieve their lands to them. Based on these projects, the whole community embraced us. We deliberated and resolved all the cases that have been pending for years. That was where the war started.

In 2020, they wrote a petition against me to DSS in Ogidi. They invited me and I defended the petition, and their commander, after investigating the case, asked me to go that I had no case to answer. Later, they petitioned us to Abuja and I came back home free. Later, they came through state CID, Awka, but we finished the case successfully.

They came again two weeks ago from zone 13, Ukpo. The person they were fronting is from Awka who claims to be an estate developer. They invited him to come and convert the lands in our community and sell them.  One day, our women complained that they were being stopped from farming in their lands; we intervened only for them to petition police alleging that we attacked and brutalized them.  We were invited by the police and exonerated. Unfortunately, the petitioners are using a serving Assistant commissioner of Police at Zone 13, Ukpo whose record from the time he served in Port-Harcourt is questionable in collaboration with a former President General of our community.

Fortunately, when I was brought before the AIG, he was able to fault their claims and rebuked them seriously. He instructed the IPOs handling the case to allow us go and come back in the next two days. Unfortunately, they invaded my house with the same deadly team from Ebubeagu on Tuesday with the intention of killing me but God saved me. I am totally convinced that both the AIG and head of DSS do not know what their boys are using the Ebubeagu team to do illegally. They are working in conjunction with one ACP at Zone 13, Ukpo. I call on them to investigate these cases and stop these unwarranted attempts on my life.

Also, the land developer who was accused of masterminding the attacks with the traditional ruler, Anthony Dibor expressed no less resentment over claims by the youth leader that tension was high in the community. He stated: “On the issue of land, it was a long disputed issue between Abagana and Eziowelle which was settled.  Eziowelle people were invited to develop theirs and I made sure our agreement passed through all legal processes. Both the Igwe, his cabinet and Igwe in council including elders approved my engagement. So, there is no illegality in what I am doing for the community and they appreciate it”.

When contacted on phone, the Assistant Inspector-General of Police in-charge of Zone 13, Ukpo, Anambra state, Umar Musa Muri said: ”We are investigating and looking forward to get more information. We want to know the truth of the matter. If we find the information to be true, we will arraign whoever is involved but if it is not true, we will prosecute the informant for giving false information. We are on top of the case.”