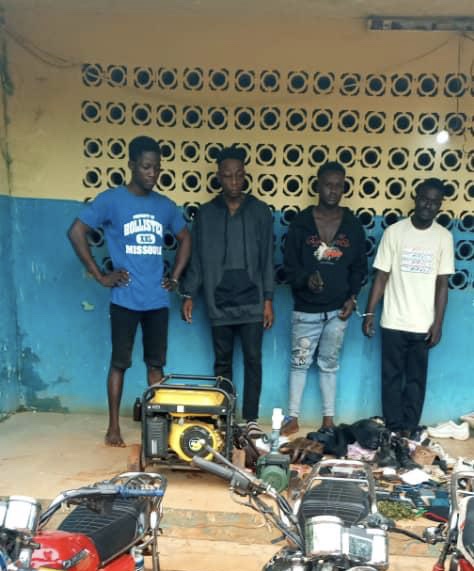 Police in Anambra State said they have arrested five suspected armed robbers in various locations in the State.

The spokesperson, Tochukwu Ikenga stated on Sunday that one of them, Okechukwu Okpo was nabbed during a gun duel in Oko, Orumba North Local Government, while four others, Chukwubike Anieto (20), Chukwuemerie Ike (36), Chidera muo (25) and Chukwuma Israel (28) were arrested in Neni, Anaocha Local Government Area of the State.

He said Okechukwu and his fleeing accomplices were responsible for over 25 armed robbery, kidnapping, car-snatching incidents as well as attack in a hotel where a female staff was raped.

He said other suspects attacked a police constable, dispossessed him of his belongings, adding that they were caught in an attempt to rob a lady of her belonging along Okofia village, Neni.

Ikenga said the suspects would be charged after investigations were concluded.

“The criminal gang on sighting the police vehicle opened fire on the Operatives. The Operatives responded swiftly, engaged the armed robbers in a gun battle, while other gang members flee the scene, Okechukwu was arrested.

“Preliminary investigations shows that the gang were responsible for over twenty-five armed robbery, kidnapping, car-snatching incidents that has happened along Oko Ufuma, Uga, Amaokpala expressway, among others.

“The most recent, according to the confessional statement of the suspect (Okechukwu) is an attack in a hotel on 13/8/2022 at Ndikelionwu, were a female staff was raped and the gang also made away with three television and other items. Also efforts are emplaced to arrest other fleeing gang members.

“Immediate search in their house led to the recovery of the above. On interrogation by the police operatives, reveals that the gang attacked a police constable, dispossess him of his personal belonging on 29/8/2022 along Umukabia Okofia village, Neni. Also most recently, the gang were caught in the act on 9/9/2022 in an attempt to rob a lady of her belonging along Okofia village, Neni.

“The Commissioner of Police, Echeng Echeng charges the operatives to sustain the tempo on weeding out the criminal elements in the state, thereby enhancing public safety and peace.

“He assures that the confidence repose on police shall not be taken for granted.”