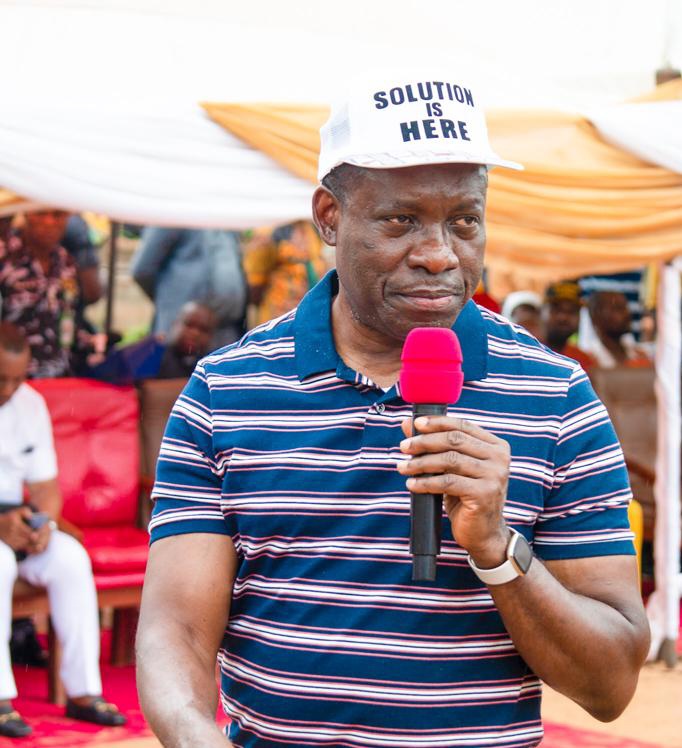 As part of activities marking his sixth months in office as Governor of Anambra state, Professor Charles Chukwuma Soludo has continued to demonstrate commitment to duty and campaign promises made, by flagging off the construction and rehabilitation of about sixty point thirty four (60.34) kilometer of more roads across the state.

The event began by flagging off the rehabilitation of the twenty six (26) kilometer Awba-Ofemili-Amansea road which will be completed within a record time of sixteen (16) months.

Another road flagged off by the Governor was the 26.4 kilometer Amansea-Ndiukwuenu-Awa-Ufuma road which will be completed in four (4) months.

According to a pact signed between the state and all the contractors, the roads are built to have at least a minimum of twenty years life span.

Governor Soludo also assured that from Awba-Ofemili, his administration will build a bridge across to Ayamelum. He equally said his government has a commitment with Awka North which he is bound to fulfill.

“I’m so emotional about this place. We even have the road we are designing that will pass through Isuaniocha to Urum and so on. The reason this Amansea to Awba-Ofemili road will take such a long time to complete is because the contractor wants the work to be done on dry stone base.

“Today, we are six months in office and as partners, we need your input in terms of advice and otherwise. I still remember that Ebenebe woman and other people who refused financial inducement during the election”.

“Eventhough there is dearth of funds, we are committed to build these roads and more.” Governor Soludo reassured

Speaking on the strategic importance of the Amansea-Ndiukwuenu-Awa-Ufuma Road, Governor Soludo explained that with the road in place, Orumba North and South can get to Awka within minutes instead of running round.

In his words: “During the campaign, we went round Orumba, namely; Awa, Ajali, Umunze Nanka, Ezira, and the rest to ask for votes. We say thank you. The All Progressives Grand Alliance is the heritage of Ndi Igbo that should be cherished and nurtured. Ndi Igbo should unite under this party.”

Governor Soludo further said, “I’ve come back to your place because this is a promise given and will be fulfilled. Hopefully, I’ll come back through here to Amansea by end of December.”

Continuing, the Governor said, “I make special mention of the late Joe Anatune of Awa. He was one big iroko that we lost who believed in the Anambra project. For two years, he relocated to Isuofia, working on it. Before his demise, the late Joe envisioned the Anambra of our dreams. And so we are determined to keep working for he did not die in vain”, added the Governor.

“As for the Isu/Igbo Isuofia/Igboukwu section of Ekwulobia/Nnobi road, the Governor said, “this is more like an emergency river. It is man-made. I heard people say that for doing the road, I’ve recognized that charity begins at home, no. We are actually doing charity from outside in this case. We came to make disruptive change in Anambra.”

“Over the next two months, we will be flagging off many roads. But we just began with the strategic ones. We will do this road in two phases. In addition to whatever we are already doing here, we are exploring phase two which is the longer term intervention of channeling the flood water collected here to Agulu lake. And mind you, most of these roads are federal roads. Our people are suffering and we can’t continue to wait for the federal. We will continue to fix them, as much as funds allow us”. Governor Soludo further reassured.

Continuing, the Governor decried the rate at which people arbitrarily erect buildings in public places in Onitsha.

Said the Governor, “sadly, Onitsha was left to die, while people started moving to neighbouring states. That’s why we started from clearing and cleaning up the place. We are working on the greater Onitsha water scheme because Onitsha must rise again”

“We promised Ndi Anambra and we’ve started to gradually take back and deliver our state. We are desilting Nwangene to free the blocked drainages and water paths. There is another road, off Awka road to Trans Nkisi, we are coming”, concluded Governor Soludo.

The Commissioner for Works, Engr. Ifeanyi Okoma said that the contractors assured to deliver a road project that has the durability of nothing less than twenty years, explaining that fifty percent of the contract sum have been mobilised for the contracts.

The Secretary to the State Government, Professor Solo Chukwulobelu; Chief of Staff to the Governor, Mr. Ernest Ezeajughi; Deputy Chief of Staff and Chief Protocol officer to the Governor, Hon Chinedu Nwoye (Glamour) and Transition Committee Chairmen, stakeholders and members of the communities visited among others, were present at the event, which witnessed handover of the site certificates to the contractors.