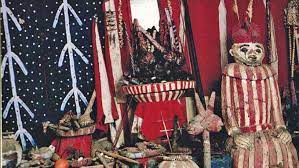 The people of Ukpor community in Nnewi South Local Government Area of Anambra State have invoked over 20 deities in the community for protection and spiritual warfare, following the spate of crime and other security-related challenges in the area, ANAMBRA PEOPLE reports

This comes barely three months after Okija community in Ihiala Local Government Area of the state invoked over 15 deities of the community for similar purpose.

Some video clips from the scenes, on the social media, show Ukpor indigenes troop out en masse to witness and be part of the cleansing exercise, which was led by the spiritual heads (Ezemmuos and Ezenwaanyis) of the various deities in the community.

The chief priests also rotationally made incantations and pronouncements at the various locations they stopped, placing curse on, and invoking the deities to expose and wage severe war against anybody or group that would henceforth conceive, mastermind, or attempt to perpetrate or indulge in any form of crime in the community, be it murder, kidnap, rape, poisoning, or other related crimes.

An indigene of the community who pleaded anonymity, explained that all the deities in Ukpor community, both Ogwugwu Umuhu, Udo Ukpor, Ulasi, and many others were involved in the exercise; even as he further warned that anybody who plans or executes evils henceforth in any part of Ukpor community would have himself to blame. According to him, he or she would incur the wrath of the deities, irrespective of his or her nativity.

He further revealed that the spiritual exercise would help, in no small measure, to fight crime and insecurity in the community, as well as restore the confidence of Ndị Ukpor (especially those living elsewhere) on the safeness of their hometown now for anyone who wants to visit home.

Ukpor, headquarters of Nnewi South Local Government, had recently become one of the flashpoints of insecurity in Anambra State, due to the activities of gunmen, who, in April, also invaded and set the council secretariat ablaze.

Other heinous crimes committed by gunmen in the community ranged from kidnapping to murder, robbery, and etcetera.