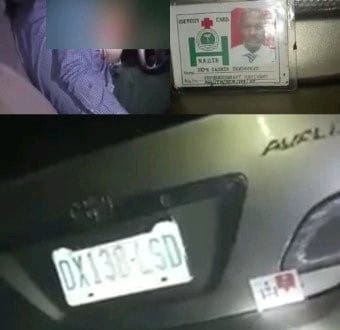 A video recorded by eyewitnesses shows the lifeless body of the deceased on the driver’s seat of his Toyota Avalon saloon with the number plate – DX 138-LSD. The deceased’s ID card showed that he was a staff member of Nnamdi Azikiwe University Teaching Hospital (NAUTH), as a Supernumerary Resident with registration number: NAUTH/RES/199/97.

One of the eyewitnesses present who recorded the video said;

“This is someone who was shot dead by armed robbers this night. He is a doctor. He is Doctor Okpe Casmir Ikechukwu. He was shot dead at Ichi. His car is a Toyota Avalon, Golden colour. His plate number is DX 138-LSD.

He is at Ichi Girls Bus Stop in Ekwusigo Local Government Area of Anambra State. His people should come for him immediately please.”

When contacted, the Anambra State Police Public Relations Officer (PPRO), DSP Tochukwu Ikenga confirmed that the matter has been reported to the police. He appealed to eyewitnesses to come forward to give details of what transpired and added that their identities will be protected and each detail will be treated with the utmost confidentiality.

”This information is important to us as it will facilitate the ongoing investigations please.” he said