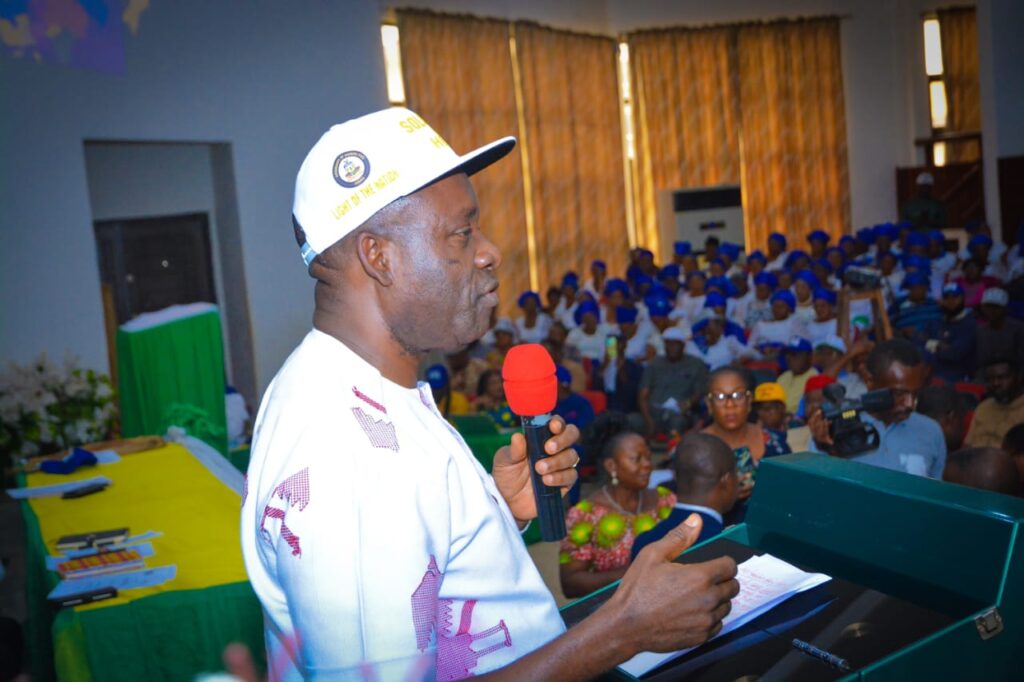 The Governor made the call at Professor Dora Akunyili Women’s Development Center, Awka, during the State Stakeholders’ Summit on the 2023 Population and Housing Census.

The event which had the theme “Getting the People involved”, was organized by the National Population Commission in collaboration with the State Government.

Speaking at the occasion, Governor Soludo stressed on the importance of planning.

“You can’t plan without statistics. If you can’t measure it, you can’t change it!”

“I want our people to take this census seriously because going forward, it will aid in national development.

“We have to know how many people we are planning for. Each community should have an accurate data of its residents.

“I should be able to call on Traditional Rulers and President-Generals to tell me how many residents are in their communities.

“The National Population Census has lots of work to do. Your promise to offer a digital, reliable, credible and acceptable data is a good thing.

“We as Government needs this number to help us plan. While having numbers of residents, we will like to know their nationalities, state of origin, tribe and religion.

Speaking further, Governor Soludo said, “We are itinerant people! Our people live everywhere but during the festive season, we have more people returning back home. I need to plan and know the number of people I’m planning for because from time to time, they must come home”,

“For some unknown reasons, we have been afraid to confront the truth. People throw numbers and extrapolate. The truth is we don’t know the number of people we are planning for.

“The 2023 census must not be another opportunity missed. I’m glad it will employ full digital means”. Governor Soludo emphasized.

“Those who disrupted the last census and said our people shouldn’t be counted should cease from such act because it cost our people dearly. Population is one of the criteria for sharing national resources.

“Our people must be wise. Everyone needs to step out to be counted. We shouldn’t repeat our past mistakes.

“Our people should get prepared. Once the time for census is approaching, those who needs to return back home should do so.

“Our Traditional Rulers, PGs, Women and Youth leaders should assist in sensitizing the people. Anambra shall be great,” Governor Soludo concluded.

Speaking before presenting the Governor with the 2023 Population and Housing Census document and decorating him as “Census Ambassador”, the Federal Commissioner, National Population Commission, Mr. Chidi Ezeoke spoke about digital mapping which will help all areas in the country and the need for people to avoid movement during the census exercise.

He maintained that it is the duty of security agencies to restrict movement and advised that people should stay in their residence from the census night till after the exercise is completed.

Mr. Ezeoke noted that the summit marks a major milestone which would help the commission to engage ndi Anambra and get feedback for a credible census in 2023.

He expressed his deep appreciation to Governor Chukwuma Charles Soludo for his support towards the digital enumeration which has been carried out and provision of land at Enugwu Agidi for building of NPC Office.

“The Governor is a source of inspiration to the commission for a credible and reliable census.

“Our objective is to create public awareness about NPC methodologies and timeline, provide robust information to the public and solicit cooperation for the conduct of the census.

“The goal is to ensure the results are digital, credible, reliable and acceptable. The commission has engaged many stakeholders in the development of the census instrument to form our census methodology.

“Our preparation is in third gear, to provide a reliable census for planning and preparation. It will be fully digital and commissioned by enhanced technology.

“I assure ndi Anambra and Nigerians that the commission is committed to providing a census that would meet international standards. Everyone will be fully counted in the right place at the right time,” he said.

In a goodwill message, Anambra State Director, National Orientation Agency, Barr. Charles Nwoji commended the National Population Commission for their synergy with State Government to drive the message to the people.

He assured that every existing grey areas will be addressed to a great extent.

He promised to utilize their structure and personnel in the 21 LGAs of the state to support the 2023 population census.

He recalled their activities in Freedom Information Act, War Against Drug Abuse and a host of others. He was confident to get the people to participate in the forthcoming census.

“We are positively changing attitudes and values. If our campaign is consistent and continuous, we can tackle misconceptions that hinder an effective census.

“We are aware of the harm inaccurate data has caused and intend to change the narrative by using our available platform to get families and groups counted.

“By adopting a more scientifically approach, we will espouse the best practises towards the exercise. An adequate enumeration will be a source of national pride. We take it as a challenge that our people are duly counted,” he said.

The Chairman Anambra Traditional Rulers Council and Obi of Onitsha, Igwe Nnaemeka Alfred asked questions on how prepared NPC is, to ensure that ndi Anambra are well enumerated.

He noted that in the last census, Onitsha North and South residents went to their various communities when the census exercise commenced.

He queried how Onitsha can get accurate data of residents when they leave during the census exercise expressing the belief that the same problem applies to Awka and other urban cities in the state.

Igwe Achebe complained about how enumerators refused to do their jobs unless their conditions are met which include provision of accomodation and other logistics during the last census, stressing that Communities had to bear the cost.

The National president of Anambra State Association of Town Unions (ASATU), Barr. Titus Akpudo in his address, hinted that census is what the government use to work, pointing out that the most important thing is to avoid repeating mistakes of the past.

He called for adequate sensitization of people residing in communities to make them participate in the forthcoming census exercise, urging everyone to participate so that the population of Anambra will increase to partake in sharing of national resources.