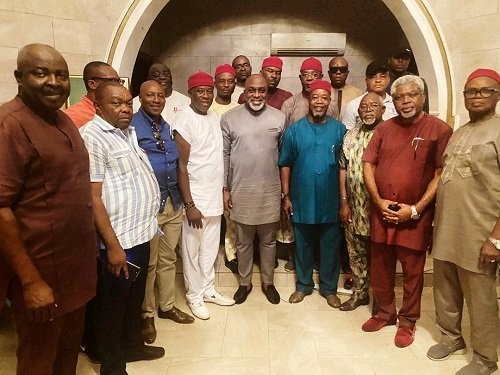 The Association of Town Union (ASATU) President Generals in Idemili North and South of Anambra State have pledged their unwavering support to the candidacy of Atiku Abubakar and Dr. Ifeanyi Okowa comes 2023 general election.

The group also vowed to do all things legally possible to ensure that Idemili leads the PDP victory in the State come 2023 general polls.

The President General of Nkpor Community Chief Emeka Mbagha who spoke on behalf the town unions at an interactive session hosted by the State Director General of the Atiku-Okowa campaign council, Prof Obiora Okonkwo in his country home Ogidi stated that their support for PDP and Atiku Abubakar was for the interest of Ndi-Igbo and the country at large.

According to him, they are non-partisan but only interested in the progress of Ala Igbo and Ndi-Igbo in Nigeria. He noted that the promise of Atiku restructuring Nigeria was the major need of the Igbo man in the country.

He said ” with the understanding that he will champion true federalism, we are proud partners of this project and will support him convincingly to deliver Anambra State to ensure his victory.”

He congratulated Okonkwo on his nomination as the State Director General and assured him of their unalloyed support to help deliver Anambra State to the PDP party. According to him, the party has always won elections in the area with ease and such would continue in 2023.

Earlier, Okonkwo went down memory lane to explain the relationship of the PDP and ndi-Igbo, starting from the days of former Vice President, the late Alex Ekwueme, who he said were the founders of the party in 1998.

According to him, Ekwueme had warned that ndi-Igbo should not for any reason leave the party but ensure that they achieve political success with the party.

According to Okonkwo South East will only find its feet politically if it continues in the Peoples’ Democratic Party and gives its bulk votes to Atiku Abubakar in the 2023 polls to inherit the Presidency and support of the Northern region after the term of Atiku Abubakar.

“We have contributed immensely to building of PDP since 1998; we cannot abandon the party now that it’s certain that we are positioned to benefit the Igbo Presidency from the party if we ensure that the party gets back to power in 2023.

Today, the PDP’s task is to dethrone the APC as the ruling party in 2023. If we don’t free Nigeria from the misery and pain that the ruling APC has inflicted upon them, Nigerians won’t forgive the PDP” he stated.

Okonkwo urged the Town Union leadership to uphold the “umunna” political philosophy, which has helped the region attain political dominance in the past and make sure that we continue to support the PDP, not as individuals, but as region.

He reaffirmed his belief that Atiku Abubakar would fulfill all of his commitments to Nigeria and ndi-Igbo, stressing that only Atiku Abubakar possesses the political will to restructure Nigeria and devolve power and resource control to the various regions of the country, which has remained the primary need of ndi-Igbo in Nigeria.

“The marginalization of Ndi-Igbo and the nepotism of the current government are issues that Atiku’s administration will address since Ndi-Igbo believe in “One Nigeria” and all that is required is justice, fairness, and equity. Without a shadow of a doubt, Atiku Abubakar will be an excellent leader and bring about a political renaissance for the Ndi-Igbo” he added.