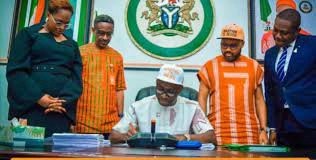 Soludo while performing the ceremony at the Governor’s Lodge, Awka, said the budget was premised on five pillars.

Soludo had on Nov. 10 presented a proposed budget of N259billion to the State House of Assembly for consideration.

The governor thanked the Anambra House of Assembly led by Speaker Uche Okafor for their diligent and expeditious consideration of the budget which made it ready for signing barely a month after it was presented.

He said that his administration was ready to deliver quality governance to the people of Anambra and that all the five policy thrusts would get equal and simultaneous attention.

“I want to thank the parliament for this productive partnership, especially the leadership, which ensures the expeditious scrutiny of the 2023 budget.

“This is the type of partnership we want in order to build the Anambra of our dream.

“This is the Budget of Acceleration, one that, in spite of the challenges of insecurity, economic downturn,we are still pressing the accelerator.

“This budget prioritises five major areas of focus as presented in my budget speech. We are now set to deliver for next year, with the budget in hand, let us get it done,” he said.

Also, Soludo said that he had met with local government chairmen on the condition of state roads and made funds available for palliative work on them.

He said that this was to ensure that they were motorable during Christmas and New Year, while awaiting the completion of major construction work on state roads.

He said that the state faced unprecedented flooding which washed off roads and bridges but assured the citizens that major intervention was coming their way.

He said that Anambra had spent about N2billion on executing palliative works on federal roads in state since he assumed office.

“Our palliative is not just the normal palliative that will make it motorable for days; the roads will be built to last, the quality is unprecedented, they will endure for a long time,” he said.