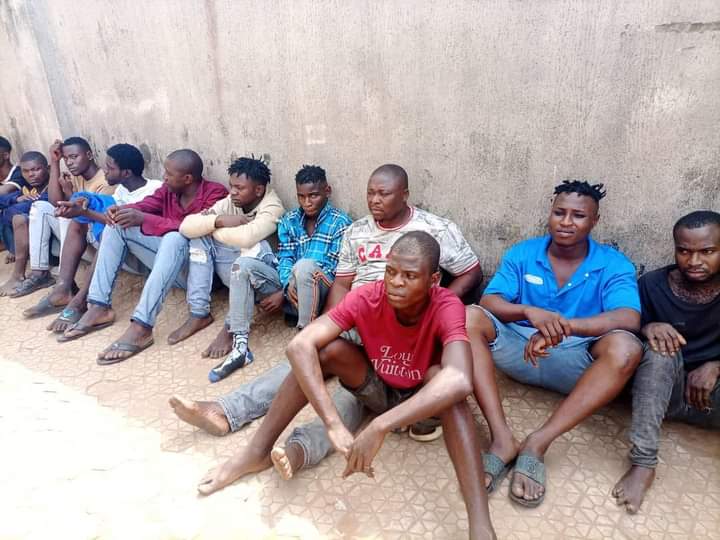 The parade took place at the command headquarters in Awka.

The suspects were young men between the ages of 20 and 45 who were moving around with dangerous weapons and patrol vehicle fraudulently written government of Anambra State and AIRS while defrauding members of the public of their properties and goods mostly in Onitsha.

Parading the suspects, the Public Relation Officer of the agency, Mr Anthony Onyekwelu revealed that in line with the bill of function of the agency, the command has been on top of their game in carrying out the mandate of government and described their job as an interface between government policies and implementation.

He eulogized Governor Soludo for reducing the taxes to be paid by commercial transporters, explaining that the move shows the administration as one with human face and the Managing Director of the agency, Mr Celestine Anere, for his dogged fight in riding the state of revenue thieves.

Some of the suspects: Mr. Ifeanyi Odili who claimed he is fashion designer at Bridge Head, Martin Okwudili from Enugu State who claimed to be a staff of a brewery company in Onitsha and Mr. Ifeanyi Nte from Nkpor all pleaded innocent to the allegations leveled against them.

They claimed they were never caught with tickets or money and appealed for proper investigation as they all have legitimate means of livelihood with proper identifications on them.