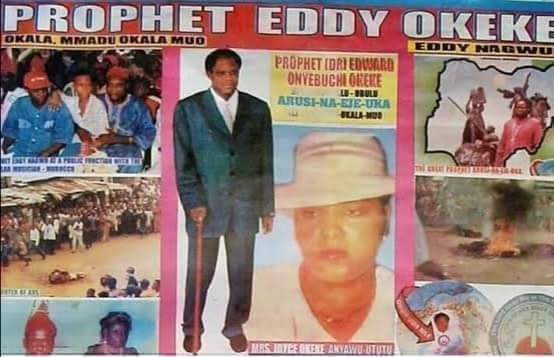 Eddie Nawgu (born Edwin Okeke) was a Nigerian sorcerer, self-proclaimed prophet and religious figure. He was popularly known in the mid-1990s as Eddie Nawgu amongst Igbo people. His nickname, “Nawgu” came about because he was from Nawgu community, a town situated in the Dunukofia L.G.A of Anambra State, Nigeria.

At the age of 29, Eddie “Nawgu” Okeke, claimed he had been touched by the Biblical God and was given the ability to “see” and “perceive” what the ordinary human eye or other four senses could not intercept.

Shortly after he began his ministry, he built a church-like structure and named it ‘Anioma Healing Centre’. He stated that the reasons for creating the ‘Anioma Healing Centre’, was to heal the sick people in the community and restore hope to people but that wasn’t exactly the case. After a few years, people started speaking of his illicit activities. In 1990 for instance, worshippers in one of his services were told to bless two men who the prophet had prayed for previously for breakthrough (it turned out that the duo had successfully transported hard drugs to Europe without being caught).

The self-proclaimed prophet of God had become a person of interest in numerous crimes committed not only in the community, but across Anambra State as a whole. As a result, he had started to attract the attention of the Bakassi boys; a vigilante security group which was set up and spearheaded under the tenure of Chinwoke Mbadinuju, former Governor of Anambra State with a single mandate to fish out criminals, sponsors of criminal gangs and men of questionable characters.

Eddie Nawgu had been accused of Kidnapping, aiding and abetting infamous criminals, partaking in rituals involving use of human body parts, i.e.,(the human skull), illegal possession of firearms and human sacrifice. This took him to the top of their “most wanted list”.

Eddie Nawgu became more visible, daring and pronounced. By the mid-90’s, he became friends with almost all the questionable millionaires of that era, they all paid him homage and had him perform tasks such as house openings and dedication of infants. He was said to be well known by most Military Administrators of the time, most of them visited him at his healing centre where he “prayed” for them.

He proudly bore the names “Alusi n ‘eje uka” (the Deity that goes to Church) and “Okala Mmadu, Okala Muo” (Half man, half spirit).

Eddie was visited 14 times before the men were able to match his powers, and apprehend him on Nov. 4, 2000.

The Bakassi Boys who had been credited for being able to apprehend every defaulter of the law with minimal effort due to their supposed “metaphysical abilities” had come to meet their match when they failed 13 times in attempt to capture Eddy Nawgu, and when at their wits end, they thought it wise to invite their supreme leader named, “Ngwuro” to help in the capture of this menace.

The capture of Eddy Nawgu was indeed difficult because the self-proclaimed prophet was, as reported by the Nigerian media; a sorcerer who allegedly could defy the rules of Physics and had the ability to teleport that is, he supposedly could instantaneously move from a point A to a point B regardless of distance. As a result of this, his apprehension was tagged the most difficult for the vigilante group. Not until the intervention from their leader “Ngwuro” who managed to strip the sorcerer of his alleged mystic abilities and they were able to finally capture the self-proclaimed prophet of God.

Eddy Nawgu, when apprehended on the 14th trial by the vigilante group, was taken to their base of operation for further questioning and interrogation. His release to the Nigerian police was vehemently opposed as the Bakassi boys argued the police could easily be influenced.

Eddie Okeke’s wife, Joyce Okeke, who gave birth to their 8 biological children was present when he was arrested. She narrated: “It was on 4 November 2000, at about 4 a.m. I was asleep. Suddenly, I heard a loud bang on the bedroom door. Someone said: ‘Open this door or I will break it down!’. I ran to the door.

My husband was sleeping. There was a second bang. I opened the door. I saw a lot of men with pump action guns and machetes. They asked: ‘Where is your husband?’ and I asked them who they were.

They pushed me aside. I called my husband to wake up. They went and pulled him from the bed. He asked them who they were and they said they were Bakassi boys, also saying that it was a government order. They were about 40 of them and more outside. My husband asked them what they wanted and they were hitting him. They dragged him outside. One Bakassi was standing at the door with a gun. He told me to go outside and cocked his gun at me. They were still beating my husband. Another group came in and asked me to show them my husband’s room. There was a boy in front of them. I recognized him as a local boy, an armed robber. He had previously assisted people who were after my husband. They turned the whole room upside down. The boy was doing it while the others were watching. They asked me were my husband’s gun was and I replied: ‘Which guns?’ There was one double-barrel gun but they were asking for pump-action guns and pistols. I told them we didn’t have any. One of them raised his machete and said: ‘I will cut off your head if you don’t give us those guns’. They found nothing. He said: ‘Turn your back and I will cut off your head’. He charged towards me with his machete, raised it, then put it down. They told me they would take me with my husband and that he will be finished if they don’t find what they wanted. I went with them and asked a girl to close the door. One of the Bakassi asked me if I wanted to show them anything. I said: ‘No, they were only children in there.’ The children were scared, so we had locked the door. The Bakassi wanted to shoot. I said: There are children in there. He asked: ‘Which Children? The ones you sell?’ I asked the children to open. The Bakassi just looked in and left them. Meanwhile, I heard the Bakassi outside shooting. I came out with them. Some were behind me, some were in front. I was just wearing my sleeping clothes and wrapper. My husband was just wearing his shorts. They had used his shirt to tie his hands. Outside, I saw Bakassi everywhere. They had made people in the compound lie face down outside. They were hitting them on their back with machetes.”

She further narrated: “They took me out towards the gate. I could see my husband and about 15 people ahead with one Baskassi group. I was about 10 or 15 steps away. One Bakassi told me that they would shoot me if I came any closer, but a Bakassi behind me was telling me to move. The one in front asked if I was deaf and threatened to shoot me. The one behind me also told me to move forward. I stood still and said: ‘I don’t know what to do’.”

High-profile government workers and officials allegedly interceded for the release of Eddy Nawgu as reported by the head of the vigilante group; Mr. Ngwuro. Although, the names of these officials were never mentioned, it wasn’t impossible that this sort of request was made by the elite individuals in the Nigerian society as the Nigerian media had severally reported long before he was captured that Eddie had become closely associated with a good number of influential persons.

During his stay as prisoner in the operation base of the Bakassi Boys he allegedly made startling confessions and acknowledged he was guilty of human sacrifice. The number of people Eddy Nawgu killed according to his confession was a total of 93 persons.

For protection, he made concoctions by killing 3-day old babies and bathing the subject with the remains and for money, he would sacrifice a pregnant woman and the developing foetus, total number of people killed for this purposes were pegged at 93, with 16 children missing from a maternity in Onitsha traced to him.

He was eventually beheaded and had other parts of his body cut in little pieces by the Bakassi Boys after which all the parts were gathered together & set ablaze at the Ochanja Market in Anambra state, Nigeria.

Before his death, he was said to have repeatedly begged to be thrown into the River Niger, and also advised everyone he had given a staff over the years to discard it in the same river upon his death.

After the death of Eddie Okeke, the state government set up a panel of inquiry into the case. The panel had no legal status, no power to require further action by the authorities, and its findings were never published.