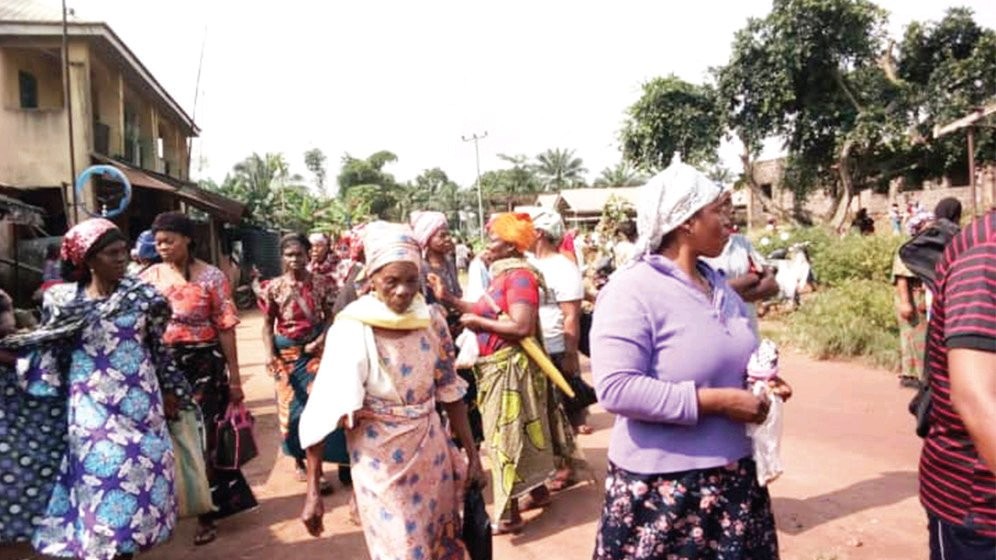 Everything came to a stand-still at Akpo community in Aguata LGA of Anambra State as the highest Igbo women policy making body called ‘Umuada’ of the town joined the fray in the battle against the rampaging menace of insecurit, ANAMBRA PEOPLE reports. They took to the street, marched through the nooks and crannies of the town praying and asking God to rescue them from the hands of bandits and ‘unknown gunmen’. A rare sight they were as some were in rags, others in tears while many wore long faces and mournful looks.

Not a few were seen wailing and rolling on the ground, almost half naked to convey their grievances over the state of security in the country. The Umuada throughout Igboland wield a lot of influence and are believed to be custodians of some measure of spiritual powers. They constitute a powerful institution in the Igbo cultural tradition and in most cases, their decisions on critical issues in the community are final. In this case, the Umuada embarked on a 2-day fasting and praying exercise to tackle the ravaging insecurity in Nigeria and particularly in their homeland. The women who converged at Nkwo Akpo said there seems no end in sight to the indiscriminate killings in the area as bandits now popularly known as ‘unknown gunmen’ have so far defied all efforts to stamp out their obnoxious reign of violence and bloodletting.
God must intervene.
Chairperson of the group, Mrs. Veronica Okechukwu, while speaking with journalists, said the only option left for the community was to seek the face of God to rescue them from the catastrophe. She said the women were also dedicating their prayers to the entire nation as no place in the country is safe anymore. She said: “Our leaders are doing the best they can yet their best have not been good enough to solve the problems instead they are increasing. “We have prayed, believing that God has intervened; our politicians ought to learn lessons from what is happening. “They need not give young people guns again for the sake of winning elections because the guns they gave them before now, they have been unable to retrieve them, which is largely the problem we face today as insecurity’’. She noted that religion is about the worship of divinity or unseen powers in one’s own understanding of divine powers.

“Tolerance is what we need to be able to accommodate others with diverse beliefs and understanding. So shedding innocent blood in the name of religion is barbaric and unacceptable.” According to her, we have advised mothers to take the messages of self realization home; our children should learn from us that they have come into this world through God for a purpose. “They are potential presidents, government functionaries, chairmen of Local councils and captains of industry. They should desist from dying for the personal aggrandizement of politicians. We should let our children know their worth and what God created them for.

Enlightenment policy
“Nigerian women must begin to educate their children on the dangers of drug abuse.They must be intentional about this. It is about the live of their children and theirs too.’’ Mrs. Okechukwu frowned at parents who peddle these drugs in the name of making money even when they know that they are destructive to users and the society in general. “If you use drugs to destroy other people’s children, you have sown a bad seed. Surely you will reap it, with your children continuing where you stopped.” She enjoined the traditional rulers to work in harmony with the President-Generals of their communities to foster peace. “It is only when there is peace in a community that you could talk about progress,’’ she said. She however commended Governor Charles Soludo’s resolve and doggedness towards giving Ndi Anambra a secure, liveable state once more.