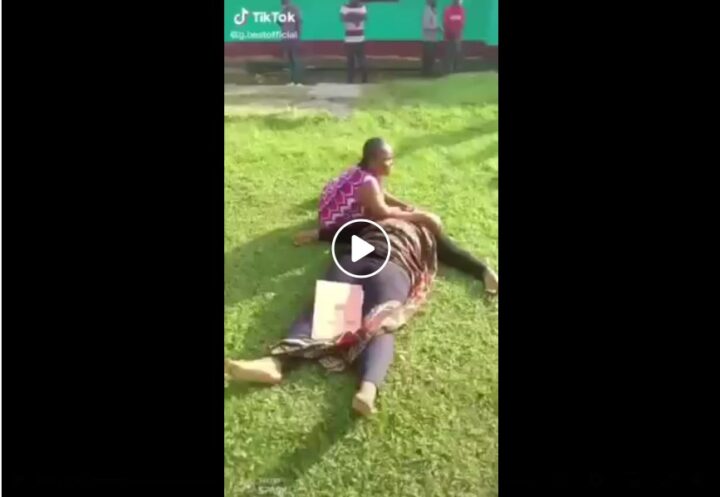 A video has surfaced online showing people mourning over dead bodies laid on the grass.

The video being shared on WhatsApp shows corpses of children and adults lying on the ground with their loved ones crying over them. Those said to have narrowly escaped death can also be seen receiving medical attention.

According to a voice in the video, those being mourned died in Nnewi, Anambra state after they picked calls from a phone number which starts with +666999.

“Good morning, ladies and gentlemen, I don’t understand what is happening in this country anymore.

“This is the latest news we hear nowadays, there is a particular number that calls people now, when you pick up the call, they use it to kill people. Yesterday, they used the number to kill 100 people in Nnewi,” the voice said in Pidgin English.

The voice also urged people to share the video with their loved ones so they can be in the know.

A close look at the video shows that it was shared from a TikTok account named G Best.

Apart from WhatsApp, the video has also been shared on Twitter on September 1, where it gathered over 2, 940 views.

The video was subjected to keyframe analysis on InVID a toolkit used to identify the source of visual content on the internet.

Running a reverse image search on the keyframes of the video, it was established that the video was from a stampede that occurred at a church outreach in Port Harcourt, Rivers state.

On May 28, 2022, no fewer than 31 persons were confirmed dead in a stampede at a ‘Shop for free’ programme organised by a pentecostal church, Kings Assembly at the Polo Club in Port Harcourt.

“From foodstuff to household items, furniture and supplies, clothes, shoes and sundry items for adults and kids, there is no limit to the gift items that are given out during this event,” a statement on the church’s website reads.

The church was said to have slated the event for 9 am on the said date but people arrived as early as 6:30 am to partake in the event.

Later on, some sportsmen arrived at the Polo Club, an opportunity the crowd seized to access the church’s tent. Unfortunately, a stampede occurred resulting in the death of about thirty persons.

The video was shared at the time on social media capturing moments people were mourning their loved ones while injured persons were being resuscitated.

The incident was widely reported in the media when it happened in late May.

The claim that people died in Anambra as a result of picking calls from a strange telephone number (+666999) is false. Rather a stampede occurred in Port Harcourt three months ago, leading to the deaths of dozens of people.