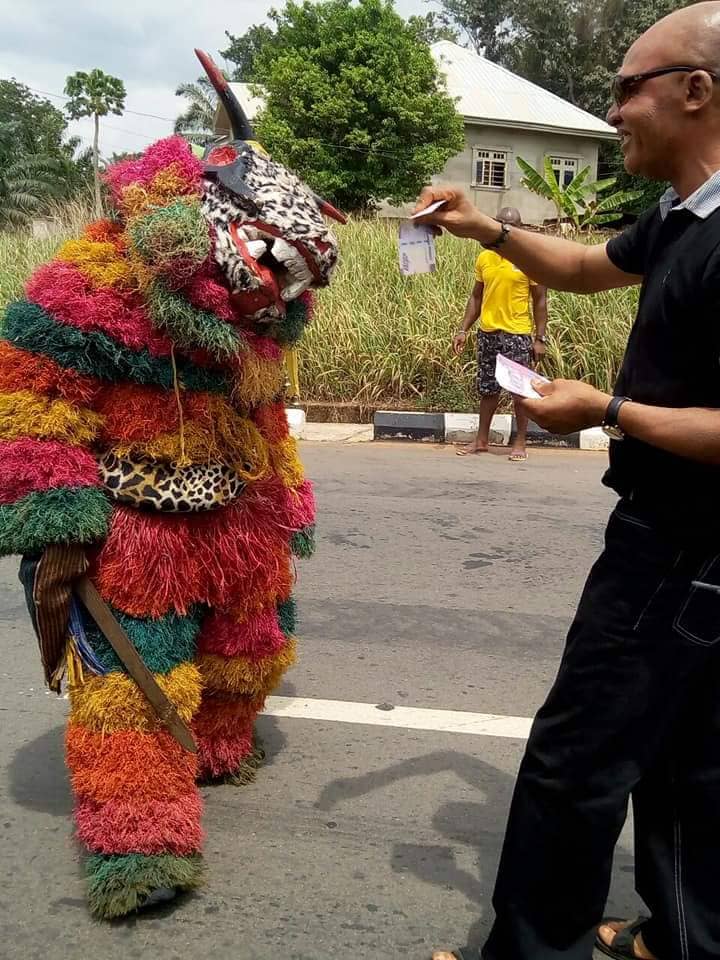 While the rest of the world celebrates Christmas on December 25, following the Gregorian calendar, the people of Ogidi in Idemmili North Local Government, Anambra State, mark their form of Christmas in July.

Known as Nwafor festival, it is the biggest annual event in Ogidi land, where literary legend, Prof Chinua Achebe hailed from. Some of Achebe’s works were influenced by happenings in this momentous cultural event. Date of the four-day cultural activities is usually determined by the lunar calendar.

Nwafor is a festival of masquerades and spirits. It is a period of annual mass return to mark the end of planting season.

The year’s festival lasted four market days of Igbo calendar, from Thursday, July 21 to July 24, 2022, was mainly for the men folks. Young boys were initiated into the manhood of masquerade, signalling transition in traditional status.

Masquerades paraded in large numbers, big and small and in various colours displayed on the streets and village squares. They ended up at the Igwe’s Palace at the last day of the event where they all dropped their canes for the next festival.

Daily Sun discovered that many people did not come for this year’s festival due to insecurity. Traditional ruler of Ogidi Kingdom, Igwe Alex Onyido (Ezechuamagha), said: “Nwafor festival has survived many challenges which would have stopped the programme last year. But due to its significance, we managed to host it to sustain our tradition and customs.

“The festival falls on Afor Market day, among four market days in Igbo land. Nwafor festival is actually celebrated at every end of farming season in Ogidi Kingdom. We are farmers and our major farming is yam; that doesn’t mean we don’t farm other farm produce. At the end of farming season, we always have time to rest, celebrate and thank our God for bumper harvest.

“Nwafor is a period whereby after the planting our crops, we have to rest small before our farm harvest in September. Nwafor is celebrated in every July.

“It is a situation where every Ogidi man is obliged to be in Ogidi. It’s mass return in Ogidi community. It is a period we return from different parts of the world to see ourselves, have town hall meeting for development.

“During this period, those who are blessed, the rich ones among us will touch lives in Ogidi with one empowerment or the other. It is a time of coming together to resolve our problems.

“This year’s festival was special because it marked my sixth anniversary on the stool. I will always promote and preserve the culture and tradition of our people

“As I promised when I was crowned that all the bad cultures we have, we are going to discard them and uphold our good customs and traditions. Nwafor is one of the good cultures which we have and continued to sustain.”

A member of the Igwe’s cabinet, Chief Ugochukwu Okwosa (Owelle), said: “The festival is gradually becoming a national and international event attracting visitors from all parts of the globe. The small masquerades called Umumuo in the course of the programme usually take over the villages.

“Before the kick-off of the programme, the gods are appeased. We do this through the traditional handlers who go to our shrines and do the normal sacrifices. The traditional worshippers also thank the gods for successful Nwafor and to stop rain for the period. Then, those who worship God will go to churches for thanksgiving for good planting season.”

Akaji Omenala Ogidi, Chief Kingsley Ndirika (Akubuo), explained: “For you to be a full-fledged Ogidi man, you must pass through the initiation process. We have the heads of shrines with the traditional rights to conduct the initiation. It is not just anybody, but those the shrines permitted to do the initiation.

“Those initiated brought their fowls, wine drinks and little money. They were led by their own brothers already been initiated. They slept over at the initiation ground until the following morning before they left.

“Their fathers were also around with two gallons of palm wine, two cartons of beer, cola, pepper and little money. It is a yearly event and they must do it as Ogidi indigenes, it is compulsory.

“There is a place we call ‘Uno Muo’ where the initiation normally takes place. It is officiated by the oldest man in the community.

“The grand finale is a period the boys return their canes to the Igwe, who in turn feeds them with food and drinks after blessing them. The surrendering of canes by the masquerades marks the end of the ceremony.”

President General of Ogidi, Chief Chuka Onubugo, told newsmen: “It is a period of joy, merriment. We invite our friends to come and celebrate with us. In the olden days, our fathers made a hip of pounded yam taller than the people eating it. You can’t see the person eating from the other end until the food reduces to little. It shows oneness, love and joy to eat in one plate as a family.”