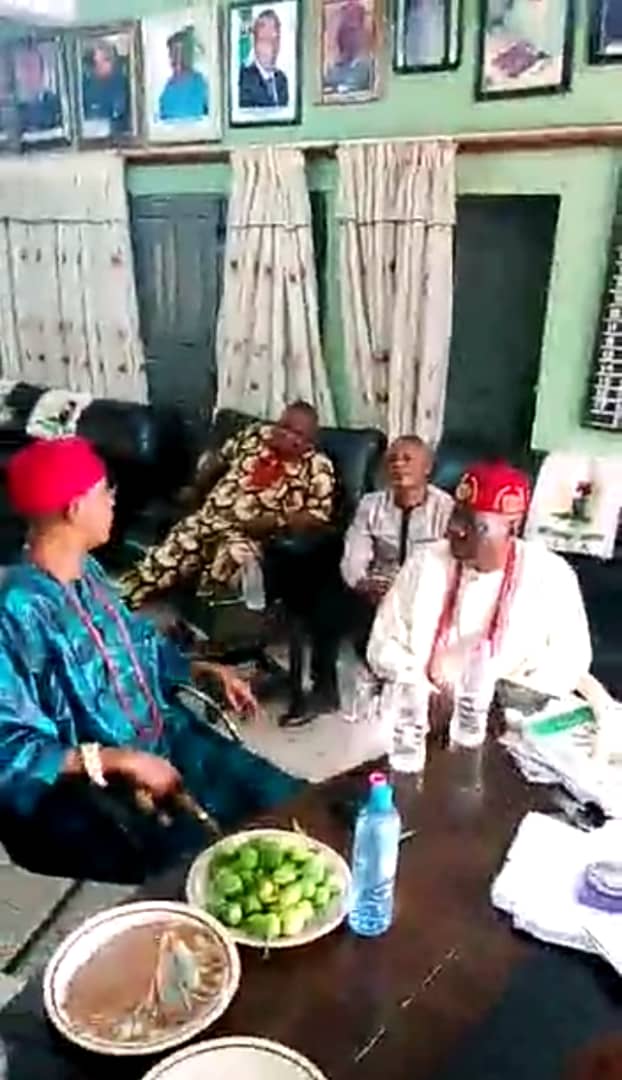 The Orumba South Traditional Rulers Council led by their Chairman and his deputy, HRH Igwe Clifford Okeke (Ezeudo of Nawfija) and HRM Igwe Bernard Emejuo (Ebubeagu of Eziagu) respectively, paid a scheduled visit to the Transition Committee Chairman of Orumba South LGA, Hon. Cyprian Okereke (Ogbuehi turuagwa) with four representatives of Orumba South Presidents-General on Wednesday 10th February 2022 to ascertain the veracity of the accusations levelled against the TC Chairman.

Recall that Victor Chigozie Ene of AIF Media claimed he interviewed Mr. Ben Oranusi and the President General of Umunze Mr. John Akanyeonu both of whom informed him that the TC Chairman looted water tank installed in Orumba South Local Government Secretariat worth about fifty million naira and sold off. They further alleged that the TC Chairman looted carterpiller , bulldozer, tipper and other items belonging to Orumba South Local Government and sold to the former Deputy Governor of Anambra State, His Excellency, Chief Emeka Sibeudu.
Alarmed by these serious allegations, the chairman of Orumba South Traditional Rulers Council picked four representatives of Orumba South Traditional Rulers and asked the President-General of Umunze Town who also is the Chairman of PGs in Orumba South LGA, to select four representatives from Orumba South PGs for this fact-finding visit.
The team of the Traditional Rulers and Presidents-General were shocked to the marrow, when they discovered that non of the allegations against the TC Chairman was true. The team was even more upset when they found out that the water tank that the TC Chairman was accused of looting and selling, was never in existence in the Secretariat: rather, it was the tank for Umunze water project located at Nwikpa School in Umunze, that was shown in the accusations, just to tarnish the image of the TC Chairman.

The scrap iron tank purportedly installed by Ben Oranusi”s Local Government administration in 1991 without any borehole to function with, was seen by the team, with it’s complete four stands.
The team described these allegations as frivolous, mischievous and nothing but campaign of calumny. They therefore warned the citizens of Orumba South to desist from this kind of vicious and radiculous behavior. They stressed that Orumba South Local Government Secretariat does not belong to any one Community, but to the fifteen communities that make up the Local Government.
They passed vote of absolute confidence on the TC Chairman and warned detractors to stay clear of the Local Government, and desist from meddling with the affairs of the Council as it is an arm of the government and answerable to the State Government.
They urged the chairman to keep on with his good works, especially in the area of sinking a borehole which has eluded the Local Government Secretariat since creation.
Among the Traditional Rulers in the team are:
HRH Igwe Clifford Okeke (Ezeudo of Nawfija), Chairman, Orumba South Traditional Rulers Council;
HRH Igwe Bernard Emejuo (Ebubeagu of Eziagu), Deputy Chairman;
HRH Igwe Samuel Uche ( Ezedioramma of Ezira); and
HRH Igwe Thomas Ogbonnaya (Eze Ogbambiaka of Owerre-Ezukala)
Among the Presidents General are Mr. Obi Chukwuma of Eziagu, Mr. Nwoye Boniface of Ihite and Akanyeonu John of Umunze.