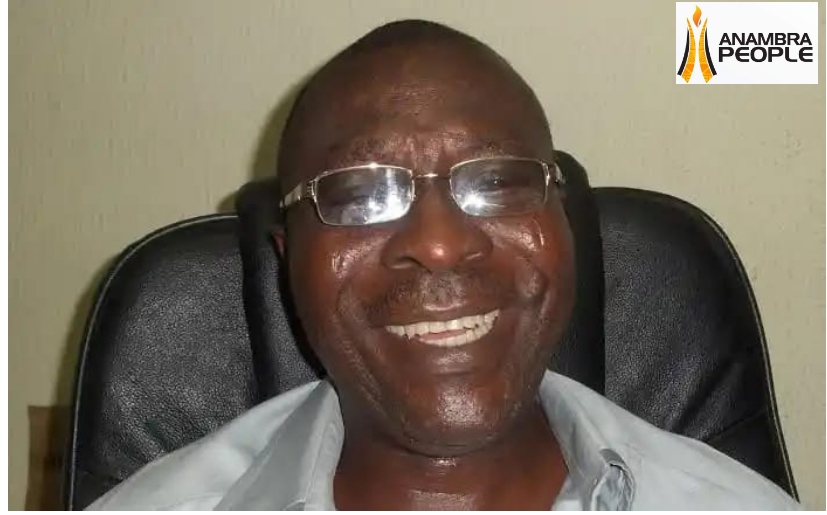 For being an advocate of peace and an agent of development through the propagation of the gospel of good neighborliness, culminating in dispute resolutions between communities, Chief Sir Sam Anyanwutaku is our Anambra Person of the Week.

It was Albert Camus who said that peace is the only battle worth waging. It is a necessary ingredient for development, the foundation upon which civilizations were built. Its absence leaves a trail of sorrow, anguish and strife- in some cases, unwarranted and needless loss of lives. Dreams are aborted, the future halted, and man becomes a beast. That is why globally, institutions and countries earmark humongous resources towards the furtherance of peaceful coexistence. History is replete with such instances of absence of harmony. The end result is always the same-wanton waste of human lives, properties and means of livelihood. Aguleri/Umueri, Ife/Modakeke fracas are examples of how fratricidal war separated two communities that shared a lot in common. This is the reason individuals and groups that promote peace are assets to their societies. One man who has done this well is Chief Sir Sam Anyanwutaku (Obataobie). It appears he has chosen the promotion of peace as a pet project and God has continued to help him with great result. What he has done so far in that trajectory may appear simple but yet has steered Anambra away from unnecessary waste of lives which has become the bane of many societies in Nigeria. These are the real ambassadors of peace, the honorable men, the bible described as peace makers whose reward will continue to be peace.

In 2018, Chief Sir Sam Anyanwutaku played a key role in the settlement of land dispute between Ogidi and Umunnachi community. The dispute which had led to wars, causing loss of lives and properties, had lingered for over 100 years and had led to court actions which spanned for decades and went as far as the Supreme Court of Nigeria. Ordinarily, as neighbors with common identity and cultural ties, both towns were supposed to inter marry, relate in common festivals and build a prosperous future. But like the legendary Chinua Achebe, who incidentally hailed from Ogidi community, wrote in his all-time classic novel, the struggle for land was the knife that tore through the bond of brotherhood. The falcon could no longer hear the falconer, things fell apart and the center could no longer hold. However, respite came through one man who has seen the need for peace and waded in to perform the quasi-government and judicial function. He stood in the middle and brokered an enduring peace between the two communities. It is no mean feat.

Wading into the crisis that threatened to shatter the peace between the Ebenezer Anglican Church, Diocese on the Niger and the Oze community of Nkwelle Ezunaka was another great peace initiative of Chief Sir Anyanwutaku. The reason for the crisis was the handing over a school to the Anglican Church by the government of the State under Mr Peter Obi. The community insisted that they built the school themselves in the 80s and handed it over to Government. The action of the Government ignited a crisis that nearly spiraled out of control. The community demolished the church building and sent the church packing to reclaim their land. The church on the other hand embarked on a massive protest, leading to government intervention. A four man panel was set up, with the Deputy Governor as the leader. Pleas by the panel to parties to maintain status quo fell on deaf ears as the Anglican church continued to rebuild their structure while the community threatened further demolition. The courts were also approached for adjudication. The crisis defied all government solutions, until the quick intervention of Chief Sir Anyanwutaku who brought the Church and the community to the table for dialogue. After several meetings by the representative of both parties, even though it was later established the community owned the premises, Obata Obie was able to prevail on the then PG of the community, Elder Chris Eluemunor to rein in his men and relinquish the premises to the church. This was not without admonition to the Church. It was a huge sacrifice by the community . Today, the premises has been given to the Anglican church, and there stands the imposing building of Ebenezer church for the worship of God.

Recently, Chief Sir Sam Anyanwutaku waded into a tussle between two villages, one in Ogidi community and the other in Abatete community namely Umuezeobodo Ajilija Ogidi and Umudunu, Agbaja Abatete. The two neighboring communities have after over 50 years of strife over land boundary decided to set aside their differences and commit to internal settlement and clear boundary demarcation. The boundary issue used to be a subject of court litigations and affected the comprehensive health center, Abatete built by the federal government which made all the health workers posted to the facility desert the place due to insecurity while health equipment were consistently vandalized by hoodlums. It was through the intervention of High Chie Sir Sam Anyanwutaku that the peace movement was initiated to resolve the lingering boundary issue. After over 7 sittings and so much work, the two communities unanimously wrote the state government on the terms of the settlement and invited the state boundary committee to commence the building of the boundary monument. This has been done and the two communities are now living in peaceful co-existence. According to Chief Sir Sam Anyanwutaku, he ventured into peace making because peace is paramount for any meaningful development to happen in any community. Encomium has continued to pour in for Anyanwutaku and the state government has equally presented a formal letter of commendation for the noble roles he has been playing as a peacemaker.

Apart from the dispute listed here,Obata Obie has waded into so many other land/community based and family disputes and to the glory of God,he has succeeded in resolving almost all of them.

Chief Sir Anyanwutaku is worthy of commendation for his peace initiatives and his leadership drives which fosters development and harmony in these communities. He utilized his personal resources to achieve these noble actions. In a world that is full of strife, especially at a time that our planet is facing a possible outbreak of world war, champions of peace should be projected and celebrated. Development can only thrive in an atmosphere of peace. Like the scriptures said, blessed are the peace makers, for they shall be called the sons of God.