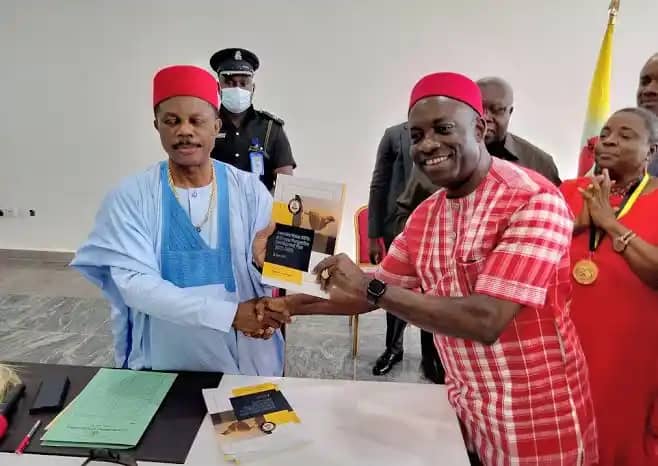 Every four years, the 17th of March signals the end of an era and the beginning of another for Anambra. It opens a new chapter that seeks to bend the destiny of the State, either for better or for worse. This year, it closed the door to the eight years of Willie Obiano’s administration. The purpose of this piece is neither to do surgical analysis of his eight years in office nor to critique his performance. I am convinced posterity will do a perfect justice to that. No one makes a private bargain with history. However, it is imperative that the new man taking over the helms of affairs should try to avoid certain errors of his predecessor. Here are five errors of Willie Obiano that Prof Soludo must not repeat for him to succeed: COMMUNICATION: In governance, communication is key. People want to hear directly from their leaders, to interact often with them, to know that their leaders feel their pulse. Willie Obiano’s communication skill is below par in the history of all the former Governors of Anambra State. It is on record that Willie in his eight years, never once appeared on the television or radio station to interact with Ndi Anambra, unlike his predecessors from Chinwoke Mbadinuju who had a tradition of observing Monday prayers with Onitsha traders, to Chris Ngige who made it a habit to once a month appear on Anambra Broadcasting service to divulge his master plan on road construction. There’s this nostalgic remembrance of Ngige on ABS saying…” Nkwo to Nkwo, uzo nke a di na Phase 2 or Phase 3”. Peter Obi as a Governor took every little opportunity he could find to communicate to Ndi Anambra. He was on T.V, Radio and you can easily find him at burial ceremonies, child dedication, wedding ceremonies, church services etc, always looking for the minutest opportunity to interact. In this day, the development in ICT has made it even easier and more effective. Numerous platforms offer easy access for interaction. There are Twitter spaces, Instagram live, Facebook Live etc. Prof Soludo is an excellent communicator. Therefore, this will rather be a walk in the park.

CLANNISHNESS: Willie Obiano took clannishness to a whole new level never seen before in Anambra State. The Governor completely abdicated his responsibilities to his kit and kins. On the streets, they were referred to as the Aguleri cabal. They controlled appointments, government revenues, contracts etc. It is a recipe for disaster and mismanagement. The body language of Soludo already shows he won’t go down such dangerous lane in leadership. His kins are already beginning to complain of his strict postures and restricted access.

VANITY: Nothing destroys a leader like vain glory. It is the shortest path towards the institution of the culture of sycophancy as demonstrated by the Willie Obiano administration. Obiano is known for his vanities, from drinking expensive wines, to wearing expensive clothing, to building insignificant signature projects, hosting lavish parties etc. A leader must have clarity, must maintain soberness always and must not be distracted by vain things of life or carried away by the paraphernalia attached to his office. Eschewing vanities brings about prudent management of resources, which frees up funds for developmental projects.

FIRST LADY SYNDROME: Never in the history of Anambra State has a wife of a Governor been extremely powerful like Osodieme. It comes as no surprise that she is warming up for the Senate. She is drunk with power, and can no more get over the intoxication. She was the de-facto Governor and called all the shots. The framers of our Constitution understood that power without control is dangerous. So they made provisions for checks and balances. However, for Mrs Obiano, there were no checks because she wasn’t elected. She was answerable to no one. When a leader with designated authority loses power or abdicates his responsibilities to an unelected person, it is always disastrous. Like President Truman said…” The buck stops here”.

ARM-CHAIR LEADERSHIP: A good leader is a doer. He is everywhere, either inspecting projects or holding town hall meetings, interacting with the people, getting first-hand information on challenges and issues going on in the state. He understands that leadership requires one to roll-up his sleeves and get dirty. It isn’t a retirement package, or an opportunity for top notch relaxation and maximum fun, while waiting for feedbacks from assistants and aides. Obiano in his 8 years acted like a bull in a China shop. He was almost an ornament that exists as a mere decoration. At the peak of security challenges bedeviling the State, the Governor always travelled abroad. Nero fiddles, Rome burns. One hopes that Soludo will change these narratives. Already, he hinted that he will work for eight hours immediately after his inauguration. He insisted on using products made in Anambra State, and the significance is huge. Furthermore, he has gone ahead to make important appointments so the ship of the State can continue sailing. Morning shows the day. For the sake of our dear State, the only place we call home, may the winds be in his favour.