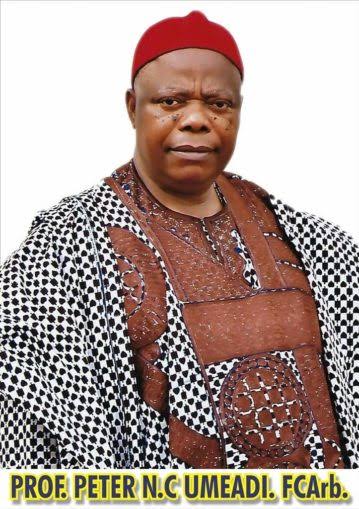 A former Chief Judge of Anambra State, Prof. Nnanna Umeadi, on Wednesday,  joined the 2023 presidential race, as he purchased the N25 million expression of interest and nomination forms of the All Progressive Grand Alliance (APGA), ANAMBRA PEOPLE reports.
Umeadi, who was State CJ during the tenure of former Governor Peter Obi in Anambra State, was accompanied by members of his support group to the APGA national secretariat in Abuja, where he paid for the party’s presidential forms.

Speaking to ANAMBRA PEOPLE after a brief closed door meeting with the APGA National chairman, Victor Ike Oye, Umeadi said he is among the most qualified of the aspirants, adding that he is bringing into his governance, rule of law and autonomy for other arms of government.

Umeadi also charged Nigerians to fight to ensure that their votes counted in the next general elections. While expressing confidence that the 2023 general election will be free and fair, the APGA presidential aspirant said though President Muhammadu Buhari signed the 2022 Electoral Act late, but it is better late than never.

He said: “APGA has always been there, APGA has always had a presidential candidate in past election, I’m an aspirant today, and it is the thinking in APGA that in 2023, we will have a presidential candidate. So, in that endeavor, we will strive to change the narrative by bringing forth what had been absent, which is leadership, because in APGA we believe that it is only good leadership that can provide change.

“To reconcile with ourselves, and it is primary in my mind, of course, my running for president is predicted on the popular vote by Nigerians at the polls. So I urge all of us to support free and fair elections. And I personally stepping out as the champion of rule of law, separation of powers and due process.

“I hope if I have the opportunity to lead Nigeria, which I will do firmly and fairly, we will engender security for lives and property, economic revitalization, and prosperity.

“I think that I’m as qualified as any other aspirant to serve as the president of the federal republic of Nigeria, be it from APGA or any other political party.

“With your experience in judiciary, what reforms will you bring on board to reform our judicial system? I have always said that the anchor will be financial autonomy to the judiciary, legislative arm of government.