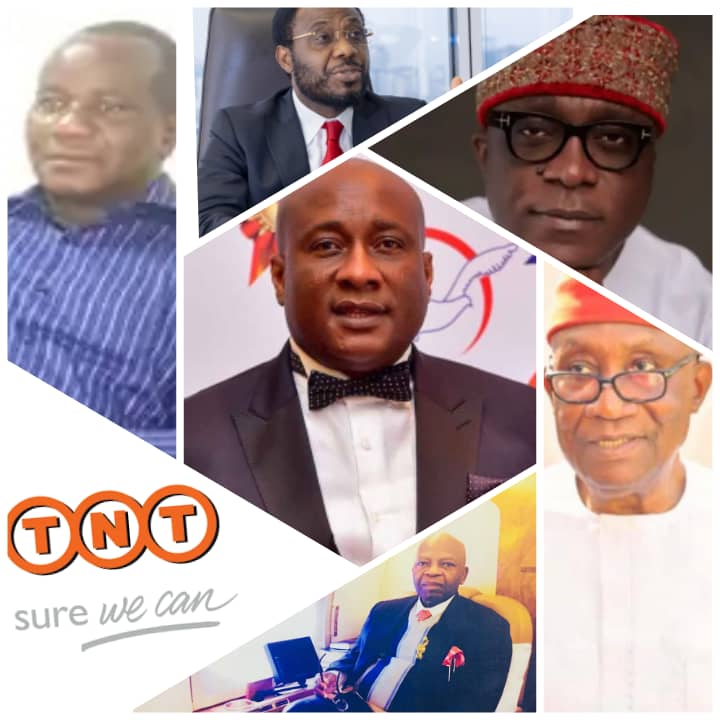 ALLEN ONYEMA: He is the founder of Air Peace, a private Nigerian airline founded in 2013 with its head office in Ikeja, Lagos State, Nigeria. He is from Mbosi in Ihiala Local Area of Anambra state. His airline, Air Peace is a flag carrier and largest airline in Nigeria and West Africa. The airline also established a subsidiary – Air Peace Hopper in 2018. In 2017, the first international route to Accra in Ghana was launched. The airline took delivery of Boeing 777s in 2018, and commenced flights to Sharjah in 2019. Flights to Johannesburg commenced in 2020. Allen Onyema’s Air Peace has a fleet size of 31.

OBIORAH OKONKWO: is a Russian-trained political scientist, businessman and entrepreneur. He is the founder of United Nigeria Airlines which was established in 2020. He hails from Ogidi in Idemili North Local Government Area of Anambra State. Obiorah Okonkwo’s United Nigeria airline took delivery of four 50-seater Embraer ERJ-145LR aircraft during the second half of 2020. Today, the airline boasts of fleet size of four aircrafts.

VICTOR IKWUEMESI was the founder of Sosoliso Airlines Limited a scheduled, domestic, passenger airline. An accountant by profession, he was from Ogidi in Idemili North Local Government Area of Anambra State. For much of its existence his airline had its head office in Ikeja, Lagos State. Originally its head office was on the grounds of Enugu Airport in Enugu. It was established in 1994 and started operations in July 2000. Fleet size of six and ceased operation in 2007. Chief Ikwuemesi died in 2020 in London.

ARTHUR EZE: the prince of Ukpo founded Triax Airlines, an Enugu based domestic airline that operated between 1992 – 2000. Arthur Eze established Triax airlines in the year 1992, after the deregulation of airlines in Nigeria. Triax airline had three B727s until it stopped operating in the year 2000. He currently operates a Gulfstream IV with registration 5N-PZE.

BENJAMIN AGHALIAKU ARINZE: is an Anambra man from Ozubulu. He founded Aghaliaku airline in Swaziland with its base at the Manzini King Mswati III International Airport, Swaziland. Aghalieaku Airways commenced operations in August 2016 but it ceased operations 2017.

IFEANYI OBIKE is a young Igbo entrepreneur from Enugwu-Ukwu in Njikoka Local Government Area of Anambra State. He plans launching a new airline called Obike Air to compete with the other established names in the Nigerian airline industry. Obike Air plans to be a global airline. The airline appears set to take off any moment as mock up visuals of the brand are already making the rounds as investors agreements are being perfected.

CHIDI ANYAEGBU is the founder Havila Air which is expected to take off soon. He is from Amichi, a successful transport mogul who has decided to diversify into the Aviation sector.

JOSIAH OKOYE founded IAS Cargo Airlines Nig. Ltd with its base in Lagos, Nigeria. He is from Enugwu-Ukwu in Njikoka Local Government Area of Anambra State. The defunct cargo airline was mostly operated as one of the subsidiaries of TNT courier services.

ERNEST AZUDIALU OBIEJESI: is the founder of Nesto Aviation Services Limited (NestAv), an aviation arm of his parent company, Obijackson Group. It provides safe air transportation within and outside the shores of Nigeria. With a mixed fleet of fixed and rotary winged aircraft, NestAv serves VIP, corporate charter and non-scheduled clients, in addition to critical offshore oil and gas logistics support services to the upstream and downstream Oil & Gas sector in Nigeria and Africa in general. Dr. Ernest Azudialu Obiejesi is from Okija in Ihiala Local Government Area of Anambra State.