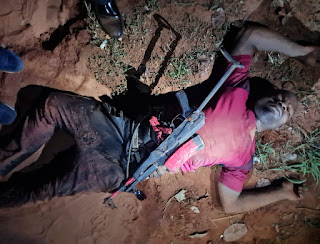 Anambra Police led by CP Echeng Echeng has repelled attack by gunmen suspected to be ESN members at Nteje Division.

The CP Echeng led crack squad in an overwhelming operation decisively dealt with the assailants as arms and ammunition were recovered in the critical operation.

The incident which took place around 3am today April 14, 2022 left some members of the criminal gang killed while others escaped with bullets .