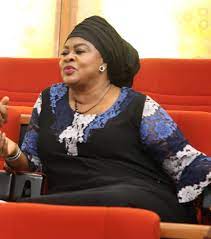 The former aviation minister had concluded plans to dump the ruling APC for the PDP, ANAMBRA PEOPLE reports.

Stella Oduah, a Nigerian Senator and former Minister of Aviation has finalized her defection from the ruling All Progressives Congress (APC) to the People’s Democratic Party (PDP), ANAMBRA PEOPLE has gathered.

A source confirmed that the Senator returned to the PDP and secretly obtained the party’s nomination form to return to the Senate.

“Senator Oduah used Senator Anyim to reach out and perfected her new arrangement and agreement with the PDP leadership preparatory to her decampment to PDP in the next few days,” the source confirmed.

ANAMBRA PEOPLE learnt on Friday that Oduah had reached out to PDP members in her zone and her town in Ogbaru Local Government Area to secure the PDP Senatorial nomination form for Anambra North zone.

She will be facing any of these strong aspirants like Dr. Tony Nwoye, Chief Mrs. Ebelechukwu Obiano and Mr. Primus Odili, former chief of staff to ex-governor Obiano after their party primaries.