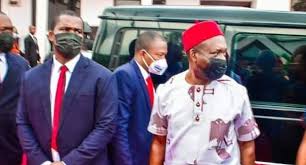 Amidst heightened insecurity in the State, the executive governor of Anambra State, Prof. Chukwuma Soludo may be on his way out of the country to hold talks with some development partners and investors who have indicated interest to partner with the state in actualizing their developmental goals, ANAMBRA PEOPLE reports.

ANAMBRA PEOPLE gathered that worried by the level of work begging for attention in the State and the paucity of fund, the governor plans to explore international windows to raise funds and seek assistance on how to contain myriads of problem facing the State. A reliable source confirmed that the governor would be visiting places like UK, China and other countries. He is expected to interface with some investors and Anambra indigenes in the countries mentioned.

Soludo has big plans to change narratives in governance in the state, but he is faced with a lot of challenges which might prove cog in the wheel in his effort. Some of the problems are insecurity, paucity of funds etc. He knows there are a lot of expectations from him and would not want to stop at nothing in reaching out to people who can help him out of the mess ex-governor Obiano plunged the state into. According to him, he applied for the job and knew there would be challenges, which he will strive hard everyday to solve.

But an online media platform (Not ANAMBRA PEOPLE) has stated that the travel was just to rest.

“Immediately he was declared the winner of the November 6 governrorship election, he jetted out of the country to London and was seen in a gym doing exercises in preparation for the huge task ahead.

After his inauguration, he took radical decisions like going to mark buildings in Okpoko for demolition without stating if those affected will be relocated.

He is also chasing out the touts in Onitsha especially Upper Iweka area of the city and daring the ‘agbaros’ who have constituted threat to the free flow of trade in the markets. While that is on, he moved into the forests and bushes to dislodge the Unknown Gunmen who are kidnapping and maiming our people. The fleeing unknown gunmen are said to be responsible for the burning of a local government headquarter in the state.

For the past one month, Prof Soludo has only initiated some moves that are yet to translate into achievements.

“It is too early to go for a rest. This was what Obiano was doing for 8 years – 6 months in Nigeria, 6 months in Houston and allowed the cabal to become so powerful and destroyed his government” the media platform stated.