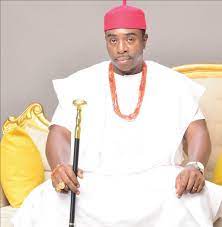 Veteran Nigerian actor and politician, Bob-Manuel Udokwu, has assured that the people of Anambra State will feel the impact of his appointment as the special adviser on entertainment, leisure, and tourism to Governor Charles Soludo, ANAMBRA PEOPLE reports.

Speaking to newsmen, Udokwu pledged to use his experience spanning about three decades in Nollywood to transform the entertainment industry in the state.

The 55-year-old, however, kept details of plans for Anambra close to his chest, saying he doesn’t want a situation where another state will copy his ideas before implementation.

Governor Soludo’s appointment of Udokwu was announced in a statement by the Commissioner for Information and Public Enlightenment, Paul Nwosu, on Tuesday.

The actor who has starred in over 250 movies, including the 1992 drama ‘Living in Bondage’, had previously served as a senior special assistant on creative media during the administration of Peter Obi.

He assured that with the support of Governor Soludo whom he described as a lover of the industry, “I will deliver beyond the expectations he has of me and that of the Anambra people and those living in Anambra State”.

Udokwu said he counts the people of Anambra lucky to have someone like Professor Soludo as their governor and himself as the governor’s special adviser on entertainment and tourism.

On how he feels about his appointment, he said: “I’m happy, I feel a sense of responsibility. It shows that what I did when I was Special Senior Assistant on creative media, movie, and entertainment industry during Peter Obi’s Administration had an impact on the state.

“So, with this appointment by Professor Chukwuma Charles Soludo, the current governor of Anambra State, as his adviser on entertainment industry, leisure, and tourism, it’s a bigger responsibility which I hope and pray that I will work hard to justify the confidence he has in me and my ability to deliver. I will deliver beyond the expectations he has and that of the people who are Anambra people and those living in Anambra State.”

Asked what he plans to achieve with his new appointment, the filmmaker said, “I usually don’t disclose in advance what I plan to do because I have had some very horrible experiences in the past. It’s very easy to copy people’s ideas in Nigeria. It has happened to me several times before. I say that with every sense of responsibility and humility because of the experiences I’ve had in the past.

“Our work as entertainment people is in the public domain, so whatever I have to do, people will see it. It is not an office work that is always in the file. It will be in the public domain, people have to just wait, and my agenda will be unfolded. I can’t tell you that and when you publish it some other person in another state will run away with my idea. Trust me there’s so much to be done.

“My portfolio is not just entertainment, it is entertainment, leisure, and tourism and if there’s an agenda I hope to implement then you want me to expose it to you. I already said I don’t want to talk about things I want to do, so people don’t steal my ideas.”

“Every state in Nigeria is competing and some states may not have somebody as professional as myself or a governor that is as cerebral and who loves the industry I am in, to want to give the portfolio as an Adviser of that Industry. I don’t want to give out things that people will suddenly remember, oh Anambra is doing this and they will run and go and do it before us.”