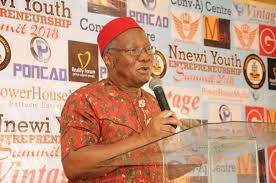 Engr. Gilbert Ajulu Uzodike, the Founder of Cutix Cables PLC, may not be the most successful or the richest Igbo businessman, but he has distinguished himself by doing something different most Igbo businessmen fail to do.

Records have it that most businesses owned by businessmen from Igbo extraction crumble after the death of the owner. Business establishments like Ekene Dili Chukwu (Nig.) Ltd, Izuchukwu Transport, Chi So Ebere Transport, Ojukwu Stores, Ojukwu Textiles, Nsoedo Motors and Hotels Limited, and other uncountable businesses have all collapsed.

Igbo businessmen prefer building their businesses around their family members, rather than setting up a professional management structure. They rarely give a thought on the need to prepare an acceptable succession plan on the event of their exit.

Instead of institutionalizing a management system, they favour employing or appointing only family members who most times do not possess skills to be managers and directors. Most of these business establishments do not have policies and procedures that take care of recruitment, employee conduct, finance and accounting.

Chief Dr Ajulu Uzodike, the founder of Cutix Cables Plc has done something different. Dr Ajulu Uzodike established Cutix Plc with a startup capital of about N400,000 in 1981, within seven (7) years, he transformed the company from a private limited company to a publicly-owned company, as the company was listed in Nigerian Stock Exchange (NSE) making it the first South-Eastern Nigeria-based company to be listed on the NSE.

Cutix PLC which is today one of the biggest cable manufacturers in Nigeria has a clear management structure which is divorced from the influences of the members of the immediate and extended family of the founder.

At the age of sixty (60), Dr Ajulu retired as the Chief Executive Officer (CEO) of the Company, giving room for another person who has grown through the company’s ranks to manage the company. Since his retirement, the company has had about four (4) independent CEOs who have carried on the Cutix vision and mission.

The current CEO of the company is Mrs Ijeoma Agnes Oduonye. She has served in many departments of the company between 1992 to April 2018 before emerging the CEO. She became the CEO after the retirement of Mr Ifeanyi Uzodike on October 31, 2018, who had served as the Chief Executive Officer of the company for ten years.

Apart from the Chief Executive Officer, the company has about seven (7) Executive, Non-Executive and Independent Non-executive Directors who determine the overall strategy of the company and follows up on its implementation, supervises the performance and ensures adequate management of the company.

Members of the Board are appointed by the Governance, Nomination and Compensation (GNC) Committee. The committee identifies, reviews and recommends candidates for potential appointment as Directors. The appointments of those Directors are subject to the approval of the shareholders in line with the statutory requirement.

Yearly, the company holds Annual General Meeting (AGM) to receive audited accounts of the year from the audit committee and independent auditors; they receive reports of the directors and also consider and review resolutions.

The Chief Uzodike’s Model is a total departure of the sole proprietorship business model of most Igbo businessmen, whose businesses cannot function independently without them.
Most critical information and documentation are only housed in the head of the owner. While this is not entirely advocacy that businessmen should not employ family members in the management of their company to keep their wealth consolidated, but for the purpose of sustenance and longevity, a clear structure, competence, experience, should be given priority.