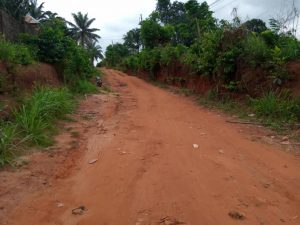 Nibo, Umuawulu and Mbaukwu communities now have reasons to smile following flag off of the ten kilometers Achalaoji Nibo-Umuawulu-Mbaukwu Road by a philanthropist from Unuawulu, Chief Christopher Ndubuisi.

The event held at Achalaoji junction along Nibo-Isiagu road was in solidarity to the aspirations of the Awka North and South federal constituency hopeful, Chief Azubuike Ekweozor.

ANAMBRA PEOPLE reports that for the second time in few days, people of Awka North and South Federal constituency are receiving quality attention from Chief Azubike Ekweozor whose ambition to represent them at the green chambers is already yielding dividends.

On Saturday, the people of Nibo, Umuawulu and Mbaukwu joined the league of beneficiaries of the large heart of Chief Christopher Ndubisi, the Managing Director Pinatech Construction Company.

Speaking at the event, Chief Ndubisi said that there is no better person to represent them at the green chambers than Chief Ekweozor popularly called, “Ide Umuawulu”, since he has been tested and trusted to help indigent people and listen to the cries of the poor.

The former Majority Leader Anambra state House of Assembly, Barrister Harford Osekein his remarks maintained that the Obizi Constituency has all it takes to represent Awka North and South Federal constituency which was why they decided to support Chief Ekweozor, calling on other communities to give him maximum support to achieve his ambition.

In their separate speeches, the traditional rulers of Umuawulu, Igwe Joel Egwuonwu and Ezinator, Igwe Timothy Ezenwaka, commended the benefactor for his benevolence, noting that Chief Ekweozor is known for doing good in terms of relating with people of the area both in celebration and in mourning times, unlike those who represented them in the past who according to them, hardly mix up with members of the constituency as soon as they are given the mandate.

The President General elect of Nibo community Professor Tony Nwokoye, on behalf of the community, promised to support the ambition of Chief Ekweozor one hundred percent, noting that construction of the road will give people of his community a big relief, as the traffic jam witnessed at Eke Nibo will be a thing of the past.

Also Speaking, Chief Ekweozor appreciated all for the confidence reposed in him and said that it is high time those contesting with him allowed him to have the mandate so that their people will rate them after his stay at the green chambers.

Chief Ekweozor called on Ndi Awka North to meet and agree on two roads that are of great importance to them so that work will commence, and disclosed that work is already on at the Amansea road.

Meanwhile, the benefactor also announced that work will kick off along Achalaoji-Eke Nibo junction to ease traffic in the area.

Chief Emmanuel Ndubisi who is the Chairman Awulu Brothers Forum was present at the event.