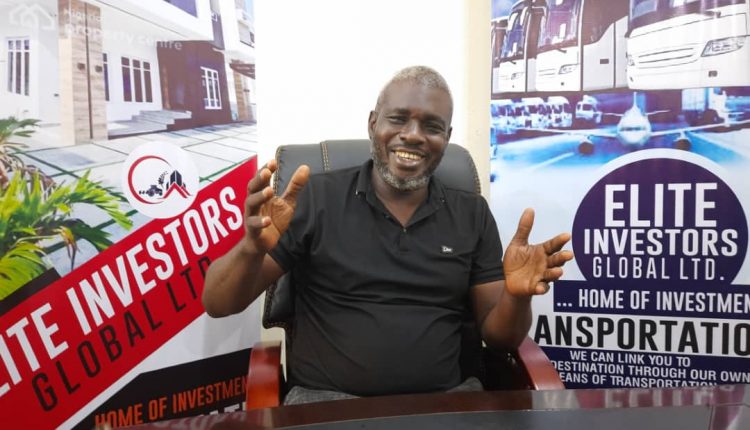 Elite Investors Global Limited, a leading investment and property firm based in Awka, the Anambra state capital, says it has concluded plans to partner with the Prof. Charles Chukwuma Soludo’s led administration to provide affordable accommodation and transportation in the state, ANAMBRA PEOPLE reports.

The Group Managing Director, Prince Eze Ude, who disclosed this to newsmen in his Awka office, said the gesture was to assist the current administration in its quest to transform the state into ‘African Dubai’. This, according to him, would assist the masses in the state in accessing affordable and standard accommodation with much ease. He said the group was ready to provide about 5,000 houses in each of the three senatorial zones of the state.

The managing director also said that the group would further partner the state government in floating a transportation scheme to ensure that residents of the state access the accommodation in the hinterlands.

Prince Ude said, “Elite Investors Limited is into building projects, we partner to build houses as well as finance projects particularly in housing, transportation and agriculture.

“We want, as a company, to partner with the current Anambra state government to build projects that will benefit ‘Ndi Anambra’. If you watch through the campaign of the governor, he said he will embark on people’ project and will run a people-oriented administration where everyone will have input in what the government is doing. This is the idea behind this partnership, to contribute our quota in the administration.

“We are coming as private investors because no government can do it alone without the private investors and other partners. Also, Prof. Soludo promised to give investors an enabling environment and good platform, hence our confidence to come to the state to invest our resources.

“It is in building a low-cost housing scheme and providing accessible transportation that we can decongest the capital city. So far, we have visited Igbariam, Achalla and Umunze and the communities are willing to partner with us alongside the government to help drive development in those areas”, he enthused.

According to him, the housing project/scheme would have other social amenities such as road infrastructure, schools, hospitals, markets, among others. He expressed optimism that the state government would give a 10 per cent subsidy to cushion the effects to the masses who will benefit from the housing.

To speed up the early completion of the housing scheme, the managing director said the group would also partner with other financial institutions and foreign firms to facilitate the achievement of the project in the next 2years.

Speaking on the transportation scheme, Prince Ude added, “We will also partner the state government to float a transportation scheme just like the BRT in Lagos State. We have the Transport Company of Anambra State (TRACAS) but it is not optimally operated. We want to revamp the TRACAS like we have in Lagos State BRT to ease movement for the masses. This, however, will not stop other transporters from doing their businesses”, he explained.

Orient Daily further gathered that Chief Godwin Ifeanyichukwu Okafor, who is also the CEO of Winco Foams Nigeria Ltd is the group chairman, while Engr. Francis Mezue, Dr. Dozie Udolisa, among others, are the Board of Governing Council, Elite Investors Global Limited.