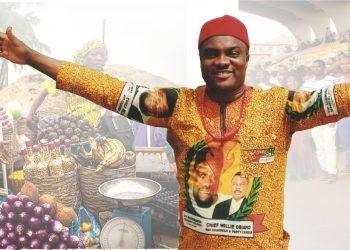 There is calm and feeling of bereavement among overwhelming number of traders in Ogbaru Main Market, popularly referred as “Relief Market” following the sack of the Chairman of the market, Chief Ndubuisi Ochiogu, who was widely elected by traders of the market under a free and fair election on January 25 this year, ANAMBRA PEOPLE reports.

Anambra State Commissioner for Commerce and Industry, Dr. Obinna Ngonadi, had last week announced the removal of 30 market leaders across the state, including Ogbaru Main Market and one other market claiming that the election that produced the two leaderships were flawed.

However, traders in Ogbaru Main Market are not relenting as some market stakeholders comprising line Chairmen and Secretaries, Sectional Heads of the market and others converged Thursday in an extraordinary meeting at the market hall to denounce the inclusion of the market leadership among those that were sacked.

He explained that the election that enthroned the market boss which was witnessed by security agents and officials of the state government was free and fair and wondered why the Commissioner for Commerce and Industry should sack their chairman under controversial circumstances.

Secretary of Patrons in the market, Emeka Okafor, Mrs. Uche Udezue, Financial Secretary, Sectional Heads, expressed worries over the state government’s decision and called on the state government to have a rethink and reinstate their sacked chairman whom they noted had worked tirelessly to end burglary in Ogbaru Main Market.

The traders said that the removal of Ochiogu must have been carried out in error as the authorities failed to hear from the market authorities, but relied heavily on the purported allegations contained in series of petitions from the opposition that contested and lost woefully in the January 25, 2022 Ogbaru Main Market Election.